Edwin Grosvenor and the largely volunteer staff of American Heritage Magazine are pleased to announce the digital publication of a new issue on July 4, 2017, our Nation's birthday, several years after the magazine was forced to suspend print publication during the recession.

Bartholdi exhibited the arm of his planned statue at the 1876 Centennial Exhibition in Philadelphia -- a decade before it was dedicated in New York harbor. This stereoscope may have been one of numerous promotional efforts to try to raise funds for building the statue's base. While French citizens had donated funds for the huge sculpture itself, it took ten years to find money in the U.S. to build the pedestal.

The Shrugg Brothers published a print of the planned "Bartholdi colossal statue"
in 1884, two years before it was actually completed in New York Harbor.
Library of Congress. 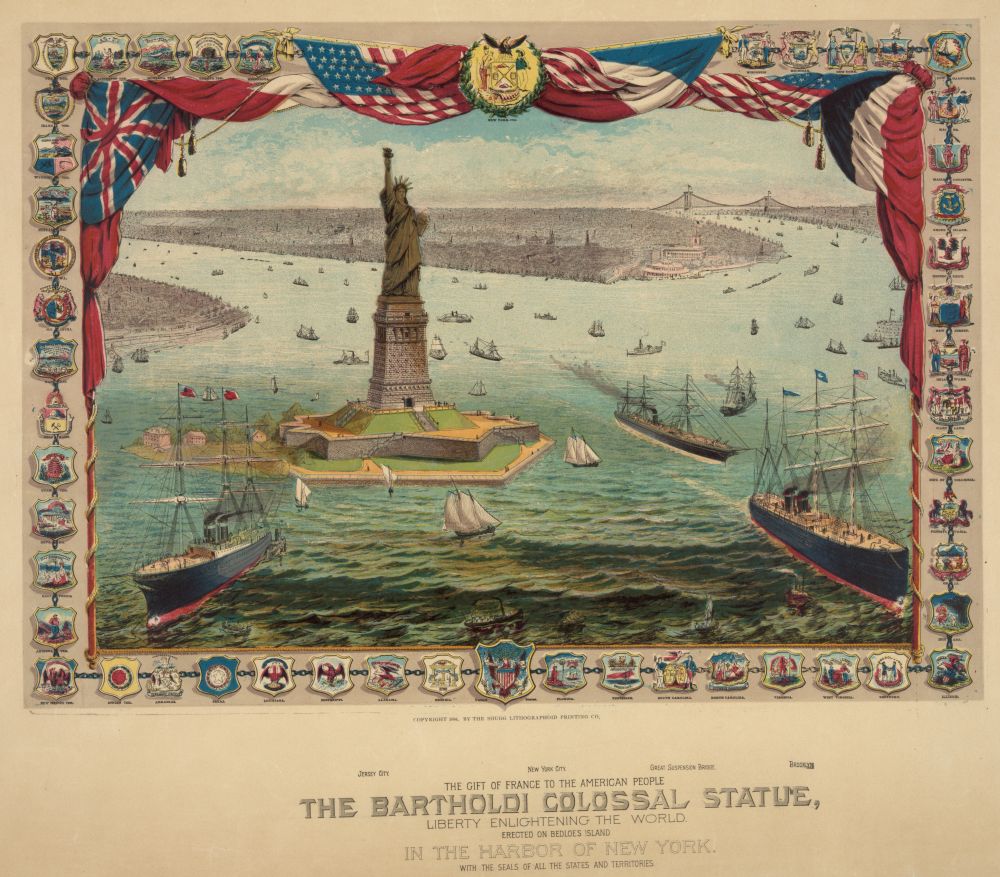 Currier & Ives published a print of the original design of Lady Liberty,
which included a fanciful lamp to be used as a lighthouse. 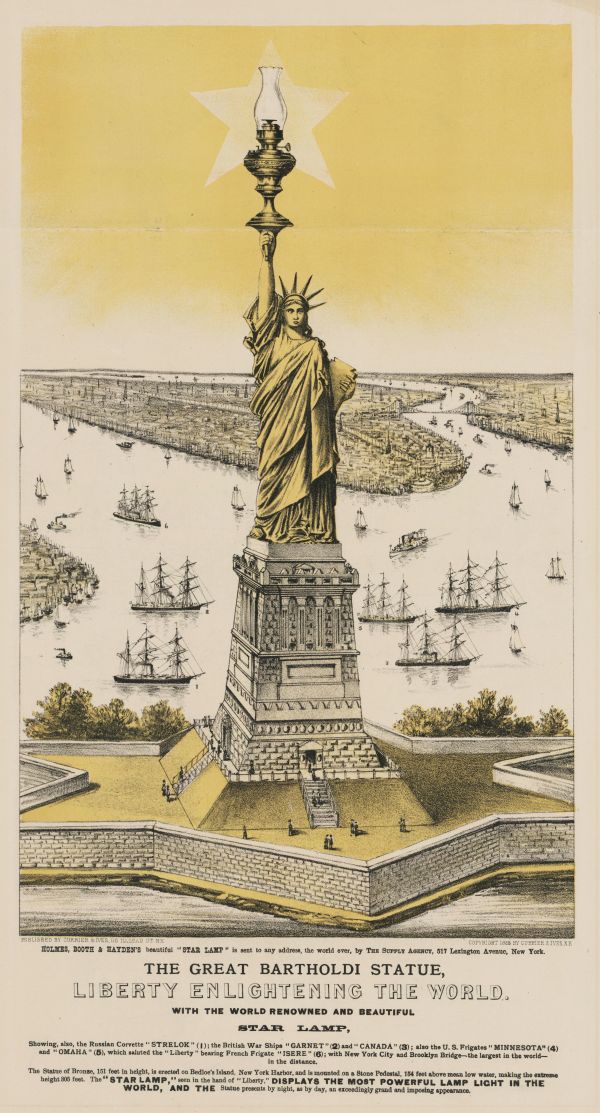 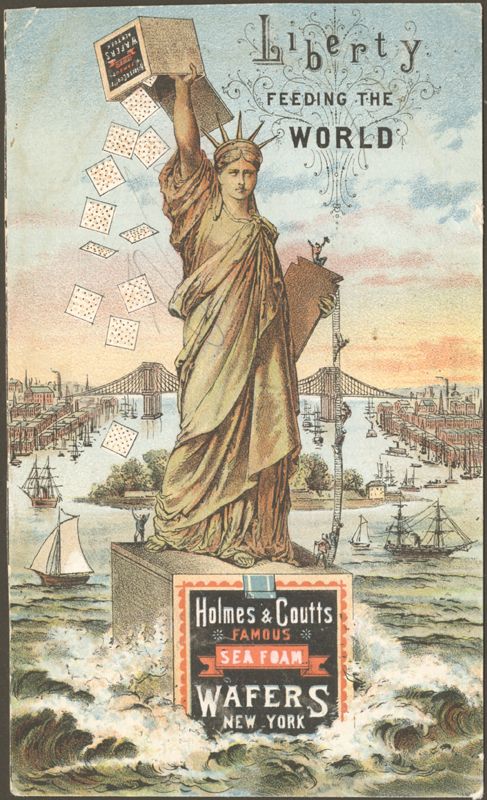 Another commercial use of Liberty was a poster for Brainerd
and Armstrong silk, the "best in the world."
Courtesy Boston Public Library. 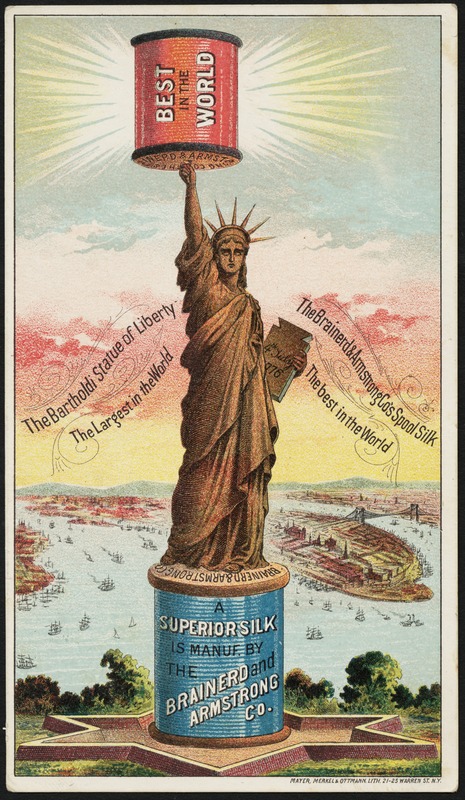 An American Collection of sheet music was published with Liberty's
image in 1885, before she was even dedicated. 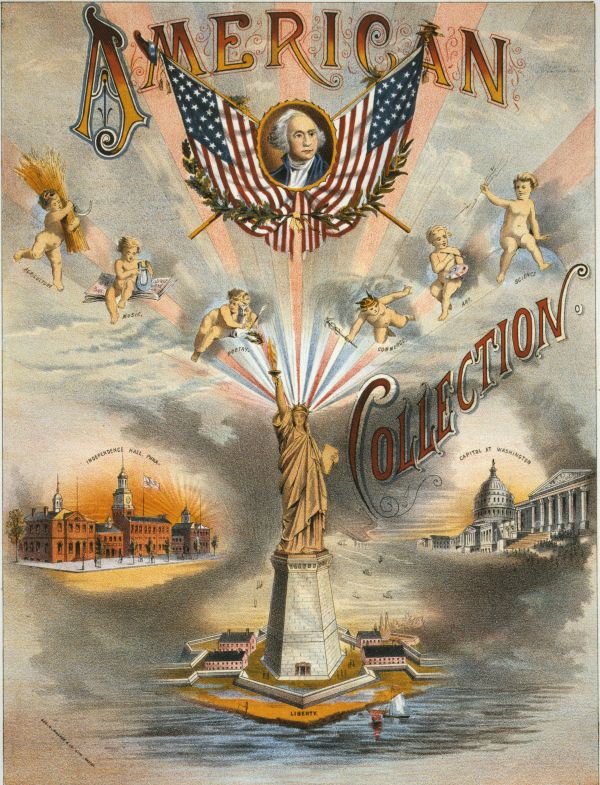 Puck Magazine parodied the commercialization of the statue with a Lady
covered with endorsements, including "Suredeath" Cigarettes. 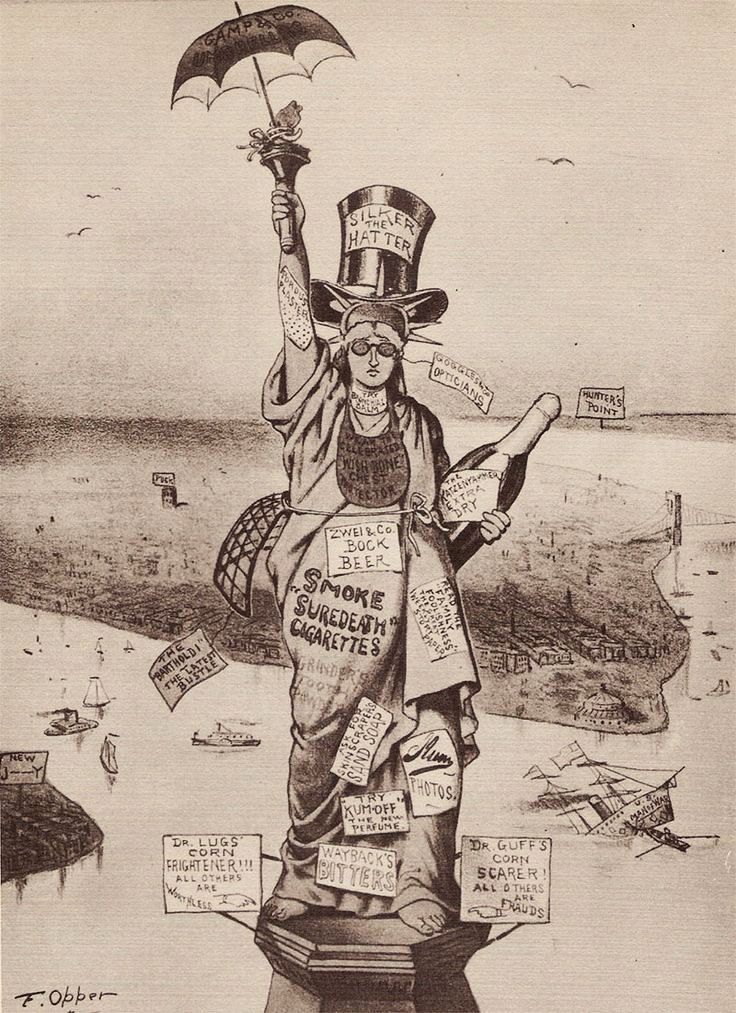 Unfortunately, the Statue became a symbol for ugly attacks against immigration. In 1881, five years before Liberty was even dedicated in New York, the Wasp Magazine in San Francisco suggested "A Statue for Our Harbor" -- with a stereotyped Chinese man holding an opium pipe instead of a torch, "filth" and other vices emanating from his head, and rats below. Courtesy of  The Ohio State University Cartoon Research Library.

During the 1880s and 1890s opposition to immigration among Nativists often surfaced
in magazine cartoons such as this one of Uncle Sam grimacing at an onslaught
of "socialists", "vagabonds", and "brigands" that appeared in Judge Magazine.
Credit: Library of Congress

The patriotism during World War I meant a much clearer message
for Lady Liberty. Courtesy National Archives. 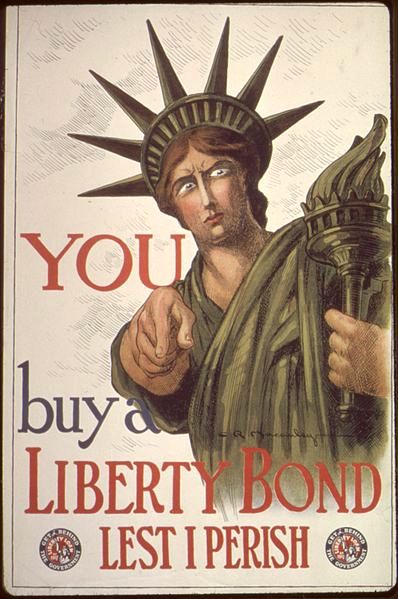 The Statue served through all four rounds of Liberty Loans
during World War I. Many posters specifically targeted immigrants. 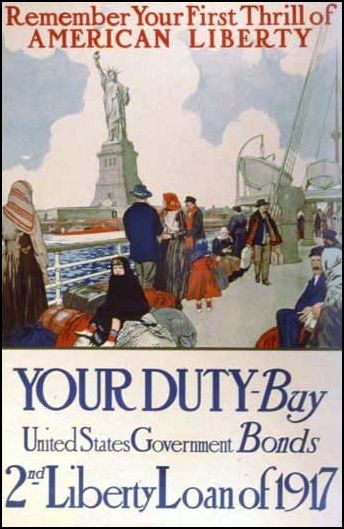 Supposedly, 18,000 Iowa National Guardsman were used to create this famous photograph
of a quarter-mile tall interpretation of the Statue of Liberty.

Navy recruitment poster in World War I featured a patrol boat passing in front
of a prominent Lady Liberty, torch beaming across the sky. 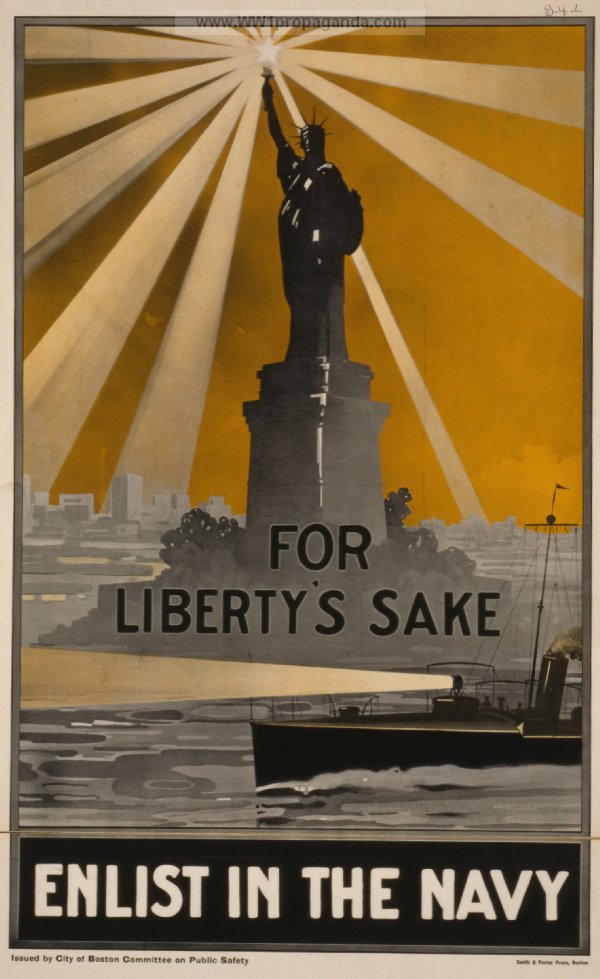 A 1916 poster printed in Yiddish stressed the importance of conserving
food to aid in the war effort. A translation of the Yiddish reads:

Political unrest and wariness towards communism after the Bolshevik
Revolution in 1917 inspired this political cartoon by James P. Alley. Originally published in the
Memphis Commercial Appeal, it was reprinted in the Literary Digest, July 5, 1919.

The Statue even made it to Broadway. Richard Halls created a poster for WPA Federal Theatre
promoting the play “It Can't Happen Here" by Sinclair Lewis and J.C. Moffitt in 1936 or 1937.
Work Projects Administration Poster Collection, Library of Congress.

Sadly, the Italian artist Gino Boccasile became a supporter of Mussolini during World War II and used his impressive creative talents to make propaganda posters such as this one of a menacing Jewish caricature with the New York skyline in the background, turning the ideals of the Statue upside down. Boccasile drew posters for the Italian SS Division and after the war was imprisoned and tried for collaboration. He had difficulty finding work and died in 1952.
Courtesy of the Wolfonian Collection/FIU.

The Statue of Liberty again became a reminder of America's ideals
during World War II, as seen in a Work Projects Administration
poster created by Albina Garlinski between 1941 and 1943.
Library of Congress.

Artist Stan Galli created a "Jet Age" tourism poster of the Statue of Liberty
for United Airlines in 1960. 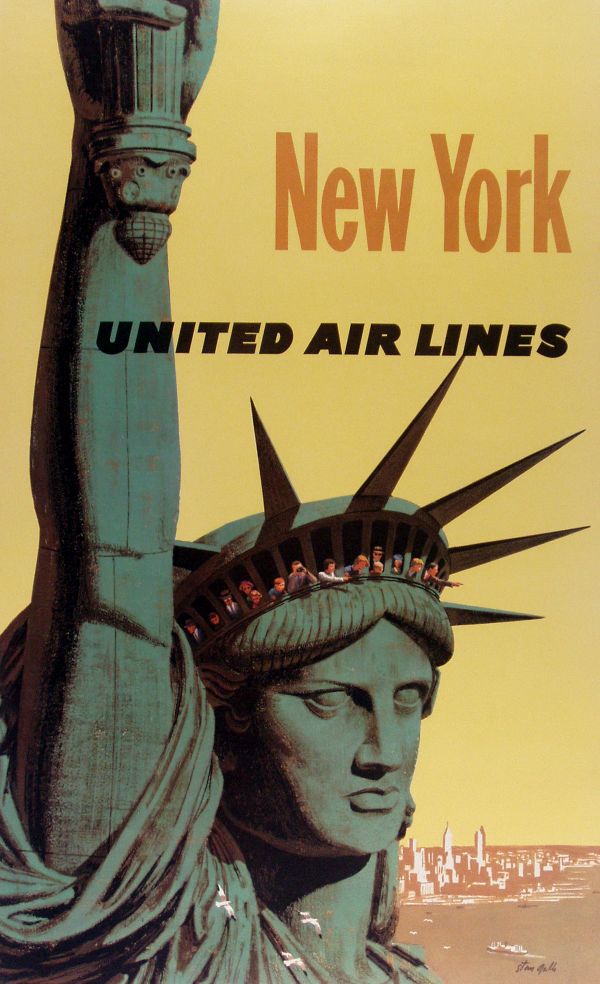 A recent exhibit at the British Museum included a Soviet propaganda poster
from the 1960s mocking alleged American hypocrisy for the suppression
of demonstrations during the 1960s. A billy club hangs from the arm of one of
two policemen in the eyes of the Statue.

On September 11, 2001, dozens of cartoonists across the country created similar images of the Lady Liberty crying,
such as this moving one by Michael Ramirez in The Los Angeles Times.

As they had before, opponents of immigration used the Statue of Liberty image to make their points. Adam DiOrio created a cartoon showing a giant tsunami of “3 Million Illegal Aliens Per Year” about to hit Liberty. Courtesy of CNS News.com.

Trump utters his famous line to Lady Liberty and her huddled masses. 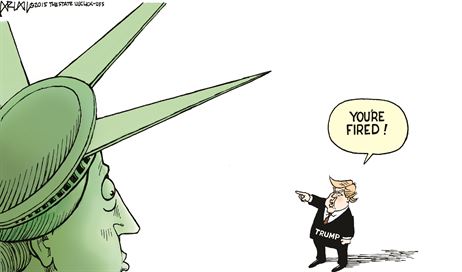 A 2014 editorial cartoon in the Los Angeles Times by Pulitzer Prize-winning
cartoonist David Horsey took a jab at opponents of immigration with a reference
to the iconic lines from the Emma Lazarus poem inscribed at the statue's feet:
"Give me your tired, your poor/|
Your huddled masses yearning to breathe free" 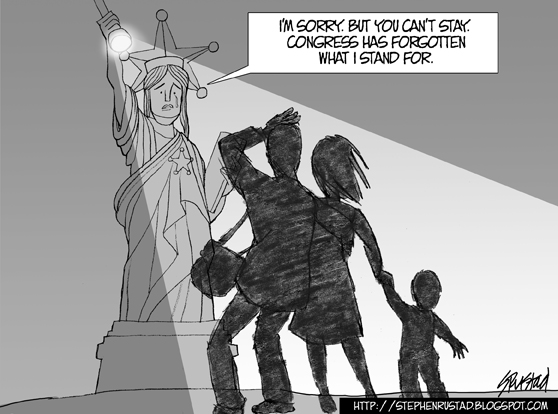 Thankfully, the Statue is often used for simple humor. An artist's homage to the famous
1954 "flying skirt" photo of Marilyn Monroe by Sam Show is an ironic combination of
two contrasting female icons. Image courtesy of Worth1000.com.

The likeness of Lady Liberty can been seen everywhere in New York, and costumed characters in Times Square offer to pose with tourists.
The out-of-town tourists don't always realize they're supposed to tip the character, leading to heated exchanges.
Photo by Edwin Grosvenor.