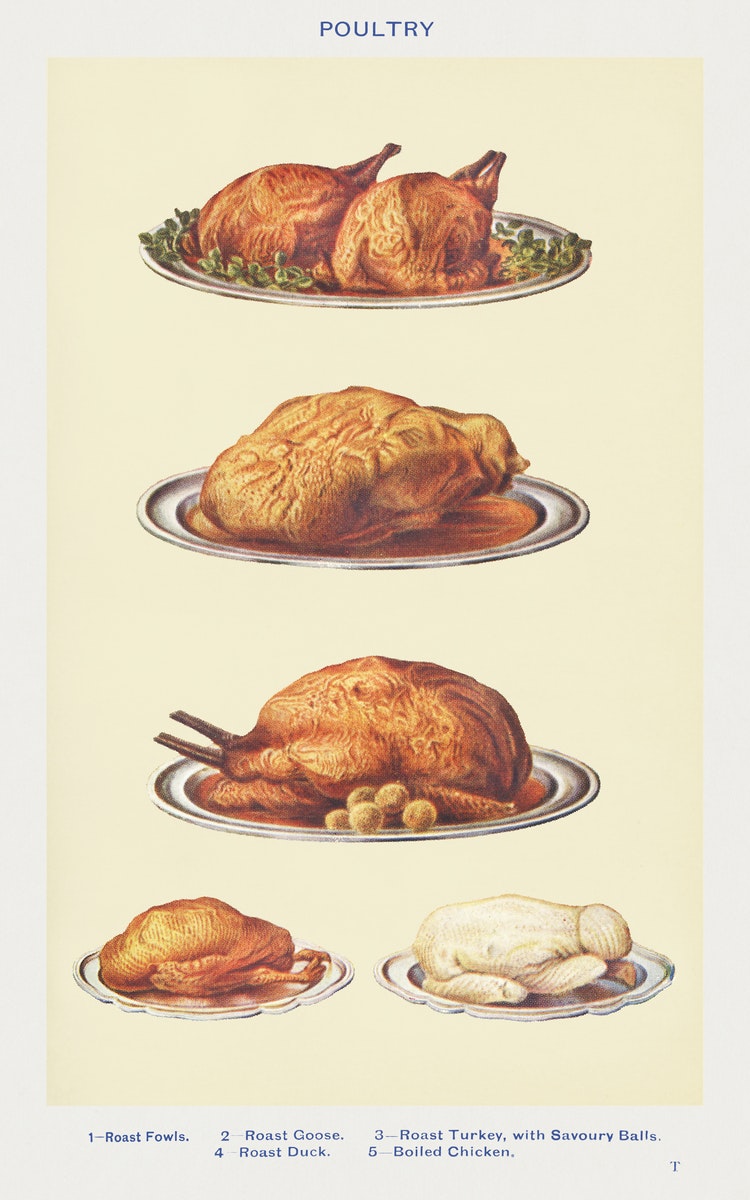 Wash the turkey thoroughly, remove any pinfeathers, and singe any hairs along the edges of the wings and around the legs. Rub the cavity with the cut side of a half lemon and stuff the bird lightly with any of the suggested stuffings (pages 70–71). Close the opening by skewering or sewing it and truss the bird well. Rub the turkey with butter and season with salt and pepper. Place in a large roasting pan and cover with several layers of cheesecloth soaked in butter. Do not add water to the pan. Roast in a preheated 325° oven. Baste several times during the roasting period, right through the cheesecloth. Remove the cheesecloth during the last half hour of cooking to allow the turkey to brown. To test whether it is done, move the leg joint up and down - it should give readily - or take several layers of paper towels and squeeze the fleshy part of the drumstick-if properly cooked, it should feel soft. To roast an 8- to 10-pound stuffed turkey, allow 4 to 41/2 hours; for a 12- to 14-pound stuffed turkey, allow 5 to 5 1/4 hours; and for a large stuffed turkey, 18 to 20 pounds, allow 6 1/2 to 7 1/2 hours.

By : The Editors
Description

In The Physiology of Taste, Brillat-Savarin - gastronomy's Marquis of Queensbury - wrote: “The turkey is surely one of the noblest gifts which the Old World has received from the New. Superlatively knowing persons maintain that the Romans were addicted to the turkey, that it was served at Charlemagne's wedding-feast, and that therefore it is false to praise the Jesuits for this most savoury of imports. Let us silence such dealers in paradox with a twofold refutation: 1) The French name of the bird, which, being coq d'Inde, clearly betrays its origin; for at first America was always known as the Western Indies; 2) The appearance of the bird, which is clearly outlandish. A scholar could make no mistake about it."

The origin of the name “turkey” has been variously explained; among the most reasonable speculations is that the word is a corruption of furkee, an Indian name for the bird. Americans, of course, rarely think of turkey without thinking of the first Thanksgiving, which the Pilgrims shared with Massasoit and his tribe. As Edward Winslow described that occasion in 1621: “Our harvest being gotten in, our governor sent four men on fowling, that so we might, after a special manner, rejoice together after we had gathered the fruit of our labors. They four in one day killed as much fowl as, with a little help beside, served the company almost a week.”

Benjamin Franklin once wrote his daughter, Sarah Bache: “I wish the Bald Eagle had not been chosen as the Representation of our Country; he is a Bird of bad moral Character, like those among men who live by sharpening and robbing, he is generally poor and often very lousy.... The turkey is... a much more respectable bird, and withal a true original Native of America."