In a moment of import, there is always one guy totally oblivious to the fact that the world is shaking beneath his feet.

Editor's Note: Harry G. Brown of Lockport, New York, writes us: “As a student of history, I thoroughly enjoyed ‘I Wish I’d Been There,’ featured in the thirtieth-anniversary issue (December 1984). While the comments of each contributor about a significant event were enlightening and interesting, I wondered what might be the reaction of the common man who happened to be present at such a time. That well-known humorist Robert Benchley captured the situation perfectly in a brief essay; fortunately, it was illustrated by Gluyas Williams, who also was featured in the same issue of American Heritage. Therefore, I urge you to secure permission to reprint this brief article for the delight of your readers.” And we did just that. 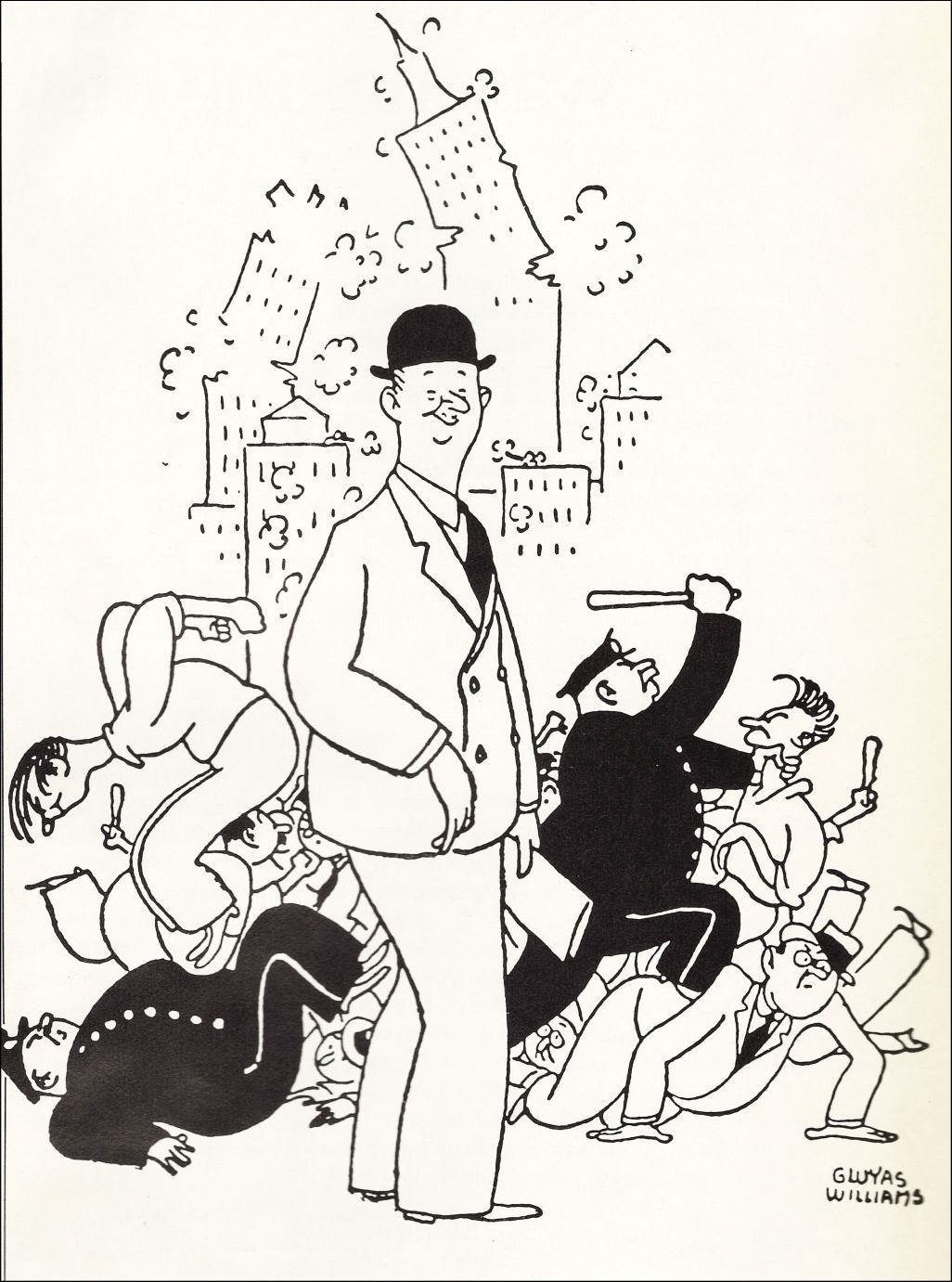 If you want to get a good perspective on history in the making, just skim through a collection of news photographs which have been snapped at those very moments when cataclysmic events were taking place throughout the world. In almost every picture you can discover one guy in a derby hat who is looking in exactly the opposite direction from the excitement, totally oblivious to the fact that the world is shaking beneath his feet. That would be me, or at any rate, my agent in that particular part of the world in which the event is taking place.

I have not seen an actual photograph of the shooting of the Austrian Archduke at Serajevo, but I would be willing to bet, if one is in existence, that you could find, somewhere off in the right foreground, a man in a Serbian derby looking anxiously up the street for a trolley car. And probably right up in the foreground a youth smiling and waving into the camera.

Revolutionary disturbances are particularly subject to this blasé treatment on the part of bystanders. Photographs which have come up from Cuba lately, and even those of the wildest days in Russia during the Reign of Terror — photographs taken at the risk of the lives of the photographers themselves — all show, somewhere in their composition, an area of complete calm in which at least one man is looking at his watch or picking his teeth.

In one which I have before me from Havana we see crowds of people fleeing before machine-gun bullets, soldiers dashing hither and yon with uplifted sabres, puffs of smoke stippling the background, and down in one corner, by a news kiosk, a man in his shirtsleeves looking up at a clock.

At any rate, there’ll be one guy who knows what time the trouble started —provided he knew that it had started.

Are these men in derby hats really men of iron, who take revolutions and assassinations in their stride as all part of the day’s work, or are they hard of hearing, or near-sighted, or, possibly, are they just men who go through life missing things?

I like to think of them as in the third category, for I know that if I were on the spot during any important historical event I would not know about it until I read the papers the next day. I am unobservant to the point of being what scientists might call “half-witted.” It isn’t that I don’t see things, but that I don’t register them. That is what makes it so difficult for me in traffic.

I could have worked in a shop in the Place de la Bastille, or have sold papers across from the Old State House in Boston, or have been an usher in Ford’s Theatre in Washington, and yet would probably have noticed nothing of the events for which those spots are famous. I possibly might have been aware of a slight commotion and, if I had worked in Ford’s Theatre, wondered why the curtain was rung down so early; but, on going home, I would, have been pretty sure to report a routine evening to the family. “They didn’t finish Our American Cousin tonight,” I might have said. “Some trouble with the lights, I guess.”

All this makes for a calm, well-ordered existence, with practically no nerve strain. Those men in derbies and I, provided we do not get hit by stray bullets, ought to live to a ripe old age if we take any kind of care of our kidneys at all. Dynasties may fall, cities may collapse, and the world be brought down about our ears, but, unless something hits us squarely in the back, we are sitting pretty.

I do rather dread the day, however, when I look at a photograph of the focal point of the World Revolution and see myself smirking into the camera with my back to the fighting. And the worst of it will be that I shall probably be wearing a derby.