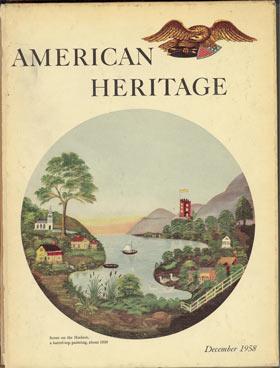 No matter how busy he was, Theodore Roosevelt always found time for his children. The charming “picture” letters below, addressed to his thirteen-year-old son Archie from a Louisiana hunting camp, recall a man who for millions of Americans will always live on, forever vigorous, forever young.

Nathaniel was poor and sunk in his solitude; Sophia seemed a hopeless invalid, but a late-flower love gave them at last“a perfect Eden”

Malcolm Cowley
The Charm Of Christmas Past
The Lordly Hudson

Discreet helpers have worked on the speeches and papers of many Presidents, but a nation in a time of trial will respond best “to the Great Man himself, standing alone”

Long after the Civil War was over, the Shenandoah’s die-hard skipper was still sinking Yankee ships

Snowshed crews on the Central Pacific, battling blizzards and snowslides, built “the longest house in the world”

Fitzhugh Turner
The Constitution: Was It An Economic Document?

A leading American historian challenges the long-entrenched interpretation originated by the late Charles A. Beard

The most serious threat to white colonization of New England was the Indian uprising of 1675-76, known as King Philip’s War. What follows is the story of the tragic man who led that futile struggle, Philip, chief of the Wampanoags. But perhaps it is just as much the story of Philip’s erstwhile friend and resourceful pursuer, Benjamin Church. This account is taken from George Howe’s superb history of Bristol, Rhode Island, Mount Hope, due in February from the Viking Press.