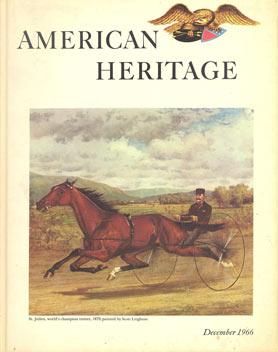 Urilla’s Dreadful Secret, Or Four Out Of Five Have It

A heart-rending excerpt from Canto the Third of Dentologia , a poem on the diseases of the Teeth

“There’s no mistake in Sam Patch!” boasted the daring young man from Pawtucket. He was almost right. There was one mistake—but in his line of work that was one too many

American forces had returned to the Philippines, and the Japanese Navy was about to make its last, desperate attempt to stave off defeat. Suddenly, by miscalculation, nothing stood between its most powerful task force and the American beachhead at Leyte Gulf but a small group of U.S. escort carriers. Could little Taffy 3 hold off Admiral Kurita’s gigantic battleships?

Marching on Washington is an old custom. When “General” Jacob Coxey and his Commonweal Army approached in 1894, the city trembled. But “the most dangerous man since the Civil War” meekly surrendered when nabbed for walking on the grass

Beginning a series of articles on notable American trials

The Case Of The Plodding Highwayman Or The Po8 Of Crime
Pat Kraft
A Whistle Good-bye
David Plowden
Verdicts Of History I: The Boston Massacre

Even the worst offender, even the most unpopular cause, deserves a good lawyer. Our example is a passionate moment in Boston on the eve of the Revolution, when John Adams undertook to defend the hatred British soldiers who had fired into a Boston mob and created some “martyrs.” There are echoes of our own times in the trial that followed

Aces, with kibitzing kings, queens, and a few other cards How many can you remember? For identification, and a reminiscence by a member of the next generation,
turn the page

The first men to follow Lewis and Clark across the continent to the Pacific were John Jacob Astor’s fur traders. They discovered the formidable chasm of Idaho’s Snake River—and almost never got out

An affectionate memoir of rural life a century ago