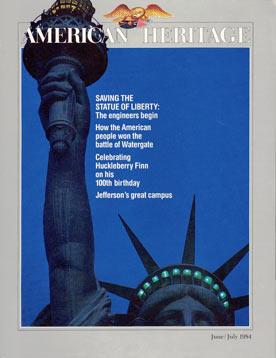 The Smile Of A Champion

LETTER FROM THE EDITOR:

Sounds From The American Past
Geoffrey C. Ward

The Triumph Of Watergate

“We do not ordinarily mean to involve ourselves, as historians, in the incomplete events of any given moment,” wrote the editors of this magazine in 1974. But they saw the Watergate cover-up as “an assault on history itself.” Now, ten years after Richard M. Nixon was forced to resign his office rather than submit to impeachment, we have asked two eminent authors to reconsider the events of that incredible summer.

I. The Hour Of The Founders

In which a President fails to fulfill his constitutional duty to “take care that the laws be faithfully executed.” And a reluctant Congress acts.

A sometime “Nixon-hater” looks back on Watergate and discovers that his glee of a decade ago has given way to larger, sadder, and more generous emotions

Turn-of-the-century American painters came to Venice for its ancient splendors and pearly light. In a few years they captured its canals, palaces, and people in a spirit of gentle modernism that looks better than ever.

In designing, the University of Virginia, Jefferson sought not only to educate young men for leadership, but to bring aesthetic maturity to the new nation

It was a difficult birth, but it looks as if the child will live forever

Robert B. Brown
Down The Mississippi

After standing in New York Harbor for nearly one hundred years, this thin-skinned but sturdy lady needs a lot of attention. She’s getting it- from a crack team of French and American architects and engineers.

Frederick Allen
“To Bring You The Picture Of Europe Tonight…”

In 1938 the European correspondent for CBS was in Austria when the Nazis marched in. He wanted to tell the world about it—but first he had to help invent a whole new kind of broadcasting.