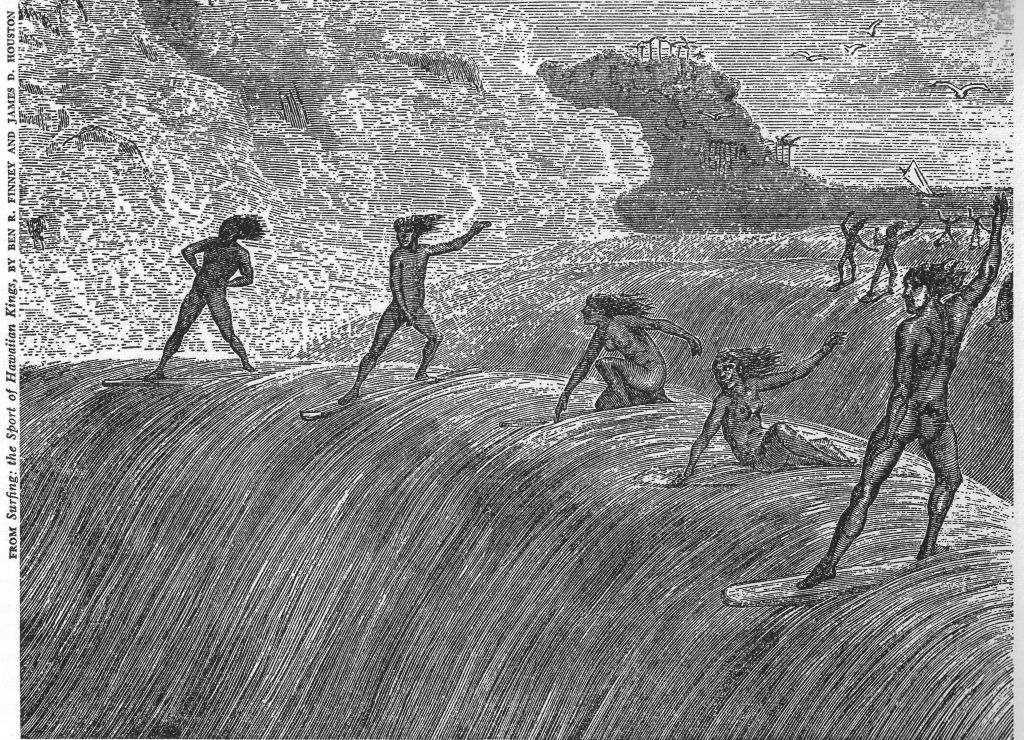 Of all the sports that the hip generation “digs,” the favorite, at least outdoors, is surfing. Yet this glorious diversion has a long, bare history, especially in our fiftieth state—as attested by the 1870 drawing above, and by this description, written by an English officer a year after Captain James Cook discovered “Owhyhee” (as he spelled it) in 1778: “Swimming is not only a necessary art, in which both their men and women are more expert than any people we had hitherto seen, but a favourite diversion amongst them. One particular mode, in which they sometimes amused themselves with this exercise in Karakakooa Bay, appeared to us most perilous and extraordinary. … Whenever, from stormy weather, or any extraordinary swell at sea, the impetuosity of the surf is increased to its utmost height, they choose that time for this amusement, which is performed in the following manner:—Twenty or thirty of the natives, taking each a long narrow board, rounded at the ends, set out together from the shore. The first wave they meet they plunge under, and suffering it to roll over them, rise again beyond it.… As soon as they have gained, by these repeated efforts, the smooth water beyond the surf, they lay themselves at length on their board, and prepare for their return. As the surf consists of a number of waves, of which every third is remarked to be always much larger than the others … their first object is to place themselves on the summit of the largest surge, by which they are driven along with amazing rapidity toward the shore. If by mistake they should place themselves on one of the smaller waves … or should not be able to keep their plank in a proper direction on the top of the swell, they are left exposed to the fury of the next, and, to avoid it, are obliged again to dive and regain the place from which they set out. Those who succeed in their object of reaching the shore, have still the greatest danger to encounter. The coast being guarded by a chain of rocks, with here and there a small opening between them, they are obliged to steer their board through one of these, or, in case of failure, to quit it before they reach the rocks, and … make the best of their way back again. This is reckoned very disgraceful, and is also attended with the loss of the board, which I have often seen, with great terror, dashed to pieces at the very moment the islander quitted it. The boldness and address with which we saw them perform these difficult and dangerous manoeuvres was altogether astonishing, and is scarcely to be credited.”

My Life With The Lone Eagle

by Anonymous
The White Man’s Burden

“The Isles Shall Wait For His Law”

by Bradford Smith
So the Bible said, but American missionaries found Hawaii a paradise where pleasure reigned, and the sense of sin was difficult to teach

The Big Island On Foot

The Enemies Of Empire

by Harold A. Larrabee
To the question of acquiring new territories overseas, and owning colonies, one group of Americans answered with a resounding “No!”

by Nancy Morris
Long before it became a state, Hawaii enchanted Americans with a vision of tropical ease, languid music, and a steady throb of sensuality. That life disappeared on December 7, 1941, but vivid traces of it remain.

Niihau A Shoal Of Time

“Mad Jack” And The Missionaries

by Robert W. Merry
Although his flamboyant successor, Theodore Roosevelt, largely overshadowed him, William McKinney deserves credit for establishing the U.S. as a global power, acquiring Hawaii and Puerto Rico, establishing the “fair trade” doctrine, and paving the way for TR’s accomplishments.