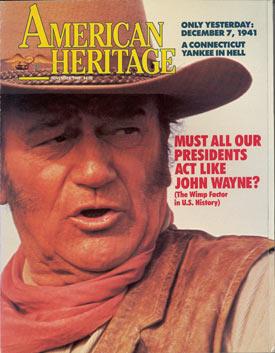 Panama: Made In U.S.A.
Bernard A. Weisberger

LETTER FROM THE EDITOR

THE BUSINESS OF AMERICA

THE LIFE AND TIMES

No Thanks for Thanksgiving
Arthur Nielsen

Occupational tintypes are about as cheap today as when they were made, but they offer a valuable look at working-class America during and just after the Civil War

Walt Whitman said, “The real war will never get in the books.” The critic and writer Paul Fussell feels that the same sanitizing of history that went on after the 1860s has erased the national memory of what World War II was really like.

The medieval look that swept America a hundred and fifty years ago wasn’t just a matter of nostalgia for pointed archways and crenellated towers; it was also the very model of a modern architectural style

A year ago we were in the midst of a presidential campaign most memorable for charges by both sides that the opponent was not hard enough, tough enough, masculine enough. That he was, in fact, a sissy. Both sides also admitted this sort of rhetoric was deplorable. But it’s been going on since the beginning of the Republic.

For a hundred years now Americans have been reading as comedy Mark Twain’s dark indictment of chivalry, technology—and all mankind

The bombs that fell that Sunday didn’t just knock out some battleships; they roused America into a new age. Here is how the long, unforgettable day unfolded.