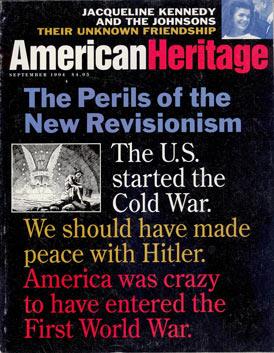 LETTER FROM THE EDITOR

MY BRUSH WITH HISTORY

The Liberation Of Paris

THE BUSINESS OF AMERICA

THE LIFE AND TIMES

Once seen as a vice and now as a public panacea, the national passion that got Thomas Jefferson in trouble has been expanding for two centuries

J. M. Fenster
A Signature On The Land

The naturalist ALDO LEOPOLD not only gave the wilderness idea its most persuasive articulation; he offered a way of thinking that turned the entire history of land use on its head

A veteran recalls the everyday courage of a threadbare generation

THE GREAT STRUGGLES of our century have all been followed by tides of revulsion: Americans decided we were mad to have entered World War I; Russia should have been our enemy in World War II; the United States started the Cold War. Now another such tide has risen in Europe, and it may be on its way here.

The Johnsons and the Kennedys are popularly thought to have shared a strong mutual dislike, but stacks of letters and a remarkable tape of Jacqueline Kennedy reminiscing show something very different —and more interesting