October has become the season of reruns of television shows about ghouls of various sorts, with images of vampires often skulking around.

Could there be some truth behind the undying clichés of vampires?

In 1990, police in Griswold, Connecticut were called to the scene of what was suspected to be a mass burial. They soon realized it was a fairly typical 19th Century family burial and notified the state archaeologist, Nick Bellantoni.

While supervising the exhumations, Bellantoni was struck by what came to be known as Burial Number 4. Unlike the other simple graves, this one had heavy, flat rocks on it with a red-painted coffin underneath. The skeleton they found inside, of an individual they called “J.B.”, had been beheaded and his bones completely rearranged, with many of the ribs deliberately broken.

When Bellantoni consulted with colleagues about this mystery, one of them asked, “You ever heard of the Jewett City vampires?”

“The savage in man is never quite eradicated,” Thoreau wrote in his journal.

It turned out that in 1854, townspeople in a neighboring Connecticut village exhumed several corpses that they suspected were vampires that had risen from their graves to kill the living. Newspapers published lurid stories about the “Horrible Superstition.” Henry David Thoreau mentioned such an exhumation in his journal, writing that “the savage in man is never quite eradicated.” Perhaps the Griswold grave was desecrated for the same reason.

Historians noted that the public hysteria almost invariably occurred in the middle of a terrible outbreak of tuberculosis. Indeed, medical tests ultimately revealed that J.B. had suffered from some lung disease very like tuberculosis. Sometimes members of a rural family would contract the wasting illness, and — even though they might have received a standard medical diagnosis — these early victims were judged to be “vampires” by survivors and responsible after their deaths for preying upon family members who subsequently fell sick. Sometimes an exhumation would be performed to stop the alleged vampire’s predations.

A particularly notorious case occurred in 1892. Nineteen-year-old Mercy Lena Brown, who lived on a farm outside Exeter, Rhode Island, succumbed to TB. So did Lena’s mother, Mary Eliza, and then her sister, Mary Olive. George Brown, the outraged father, removed poor Mercy from her tomb, assisted by his family physician, cut out her heart and burned it to ashes.

The unearthing made news when a reporter from the Providence Journal wrote about poor Mercy’s fate. Hearing about it, the noted anthropologist George Stetson traveled to Rhode Island to investigate. He later wrote to a colleague, “I found in R. I. the last summer a dozen or more well authenticated cases of families that had followed the demands of the superstition and … shown their faith in it by exhuming the dead.” 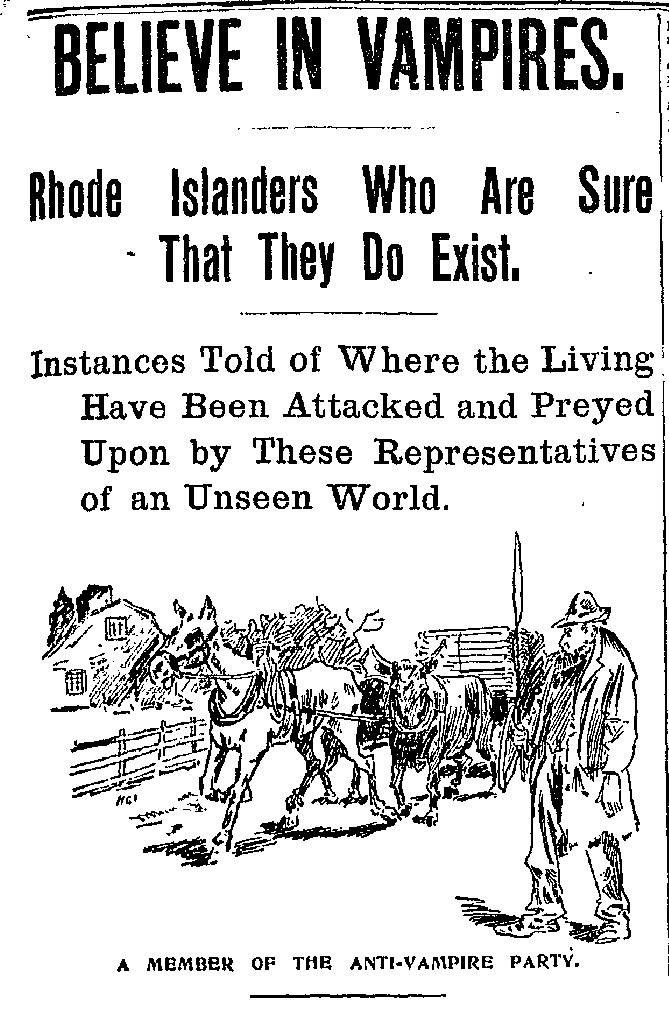 After much research on the phenomenon, Stetson published an essay entitled “The Animistic Vampire in New England” in the January 1896 issue of the venerable journal American Anthropologist. He wrote about the phenomenon occurring in ancient and contemporary cultures from New England to Europe, Asia, Africa, and the Caribbean.

“The belief in the vampire and the whole family of demons has its origin in the animism, spiritualism, or personification of the barbarian, who, unable to distinguish the objective from the subjective, ascribes good and evil influences and all natural phenomena to good and evil spirits,” wrote Stetson.

Stetson’s essay about vampires got a lot of attention – newspapers around the country ran lurid stories based on it.

Later that year an account in Joseph Pulitzer’s New York World about Stetson’s research was read by an aspiring novelist and stage manager from London whose theater company was touring the United States. His name was Bram Stoker.

The following year, Stoker published his gothic masterpiece, Dracula, that launched a literary and film tradition that, to put it mildly, refuses to die.

The Genealogy Of Mass General

by John Steele Gordon
As modern medicine has grown ever more powerful, our ways of providing it and paying for it have gotten ever more wasteful, unaffordable, and unfair. An explanation and a possible first step toward a solution.

A Medical Profile Of George Washington

by Rudolph Marx, M.d.
Stalwart as he was, the general was often ill. A doctor studies his record and notes shortcomings in Eighteenth-Century medical care.

by Joseph J. Thorndike, Jr.
In the blustery days of late fall, the traveler still can find the sparseness and solitude that so greatly pleased the Concord naturalist in 1849

“All Hail to Pure Cold Water!”

by Kathryn Kish Sklar
Beset with ailments, Victorian women found solace, in more ways than one, in a new panacea—hydropathy

by Elizabeth C. Mooney
A young girl’s memories of life in a community haunted by

by John A. Meyer
In the past seventy years, while several major diseases have been eradicated, one has risen from obscurity to take its place among the nation’s leading killers.

Benjamin Rush: the Visionary Doctor Who Became a Founding Father

by Stephen Fried
Rush was a visionary writer and reformer, confidant to John Adams, Washington's surgeon general, and opponent of slavery and prejudice - and yet a lesser-known Founding Father.

Three Sisters Who Showed The Way

by Megan Marshall
Elizabeth, Mary, and Sophia Peabody managed to extend the boundaries that cramped the lives of nineteenth-century women. Elizabeth introduced the kindergarten movement to America, Mary developed a new philosophy of mothering that we now take for granted, and Sophia was liberated from invalidism by her passionate love for her husband.