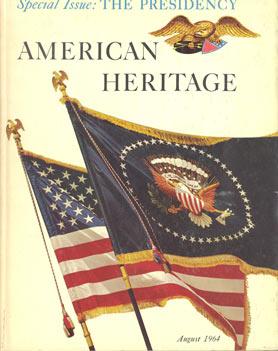 “if It Wasn’t For The Honor Of The Thing…”

Presidents on the Presidency

Ask The Man Who…

To endorse their products, early admen used even the President. Permission? They seldom bothered to

The Loneliest Place In The World
Richard H. Rovere
The Camera Comes To The White House
Roger Butterfield
The Highest Office

The Presidency has outlas fed the thrones of emperors and kings, shoguns and cxars, to become the world’s principal place of power

When Harry Truman was President of the United States he kept on his desk a little sign with the reminder: “The buck stops here.” This was his way of telling himself that when the responsibility for decision conies to a President, he has to meet it all alone. He can ask for all kinds of advice, and any amount of briefing, but he has to make up his mind by himself. Once in a generation or so his decisions send powerful echoes down the years. They may take the country along a path never before followed, enlarge the powers of the American government itself, or commit the whole nation to a policy or a program that will have permanent and vital effect. At such moments the President has to have vision, courage, and a sense of historic mission. To illustrate the matter, we consider below five moments in time in which a President made a decision whose consequences to the republic still endure.

As a national celebrity, only the Chief Executive himself outshines her. Within the awesome confines of the White House, some remarkable women have presided

Amy La Follette Jensen
How to Get Elected

The American system of choosing a President has not worked out badly, far as it may be from the Founding Fathers’ vision of a natural aristocracy

Bernard A. Weisberger
A Gallery Of The Vice Presidents

Their job, said John Adams, was nothing in esse but everything in posse. Each of them went to sleep every night and …

The Tumult & The Shouting
“Murder Most Foul”

Two shots rang out in the railroad station, and the President of the United States slumped to the floor, mortally wounded

Archie Robertson
The Man On Horseback

War heroes have often made good presidential candidates. Sometimes they have even made good Presidents

The President’s Day
The Speech That Toppled A President

Gerald Carson
A Heartbeat Away

The lure of the Vice Presidency does not seem diminished, even for those who initially set their sights higher.