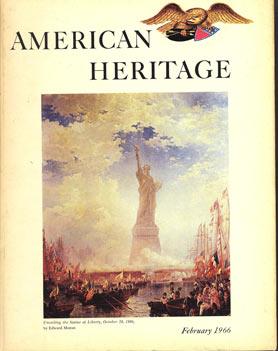 “I’ve Served My Time In Hell”

So thought many a weary Marine after the bloody, interminable battle for Guadalcanal. It was only a dot in the ocean, but upon its possession turned the entire course of the Pacific war

Three long-lost paintings of Washington in action (above, at Germantown) were part of G.W.P. Custis’ lifelong effort to glorify the foster father he adored

One thing was clear through the rain and the mist: America’s enthusiasm for Miss Liberty matched her colossal dimensions

David McCullough
Faces from the Past: Dolley Madison

In her later years, Dolley was urbane and gracious, but ruined financially by her spendthrift son.

A Grave Question for Georgians…

PASSENGERS (IF ANY) USE PLATFORM

Wendy Buehr
The Conspiracy And Trial Of Aaron Burr

No one who met him ever forgot him. His charm captivated beautiful women, his eloquence moved the United States Senate to tears, his political skills carried him to the very threshold of the White House. Yet while still Vice President he was indicted for murder, and was already dreaming the dreams of empire that would bring him to trial for treason. After a century and a half, historians still cannot decide whether he was a traitor, a con man, or a mere adventurer. Now, a distinguished writer enters the controversy with an account of

In Jackson’s day you were damned if you wore a beard; by Lincoln’s, damned if you didn’t. Then beards were suddenly ‘out “—for good, it seemed. But were they?

When the Oklahoma District was opened, boomers staked their claims. Sooners staked theirs sooner. Thousands of both were on hand, all with a single aim: