50 Years Ago in American Heritage

Alnwick (pronounced "Ań-nick) is now best known as the castle where Harry Potter movies were filmed, where Hogwarts students learned to fly broomsticks and play Quidditch among its high castellated towers. 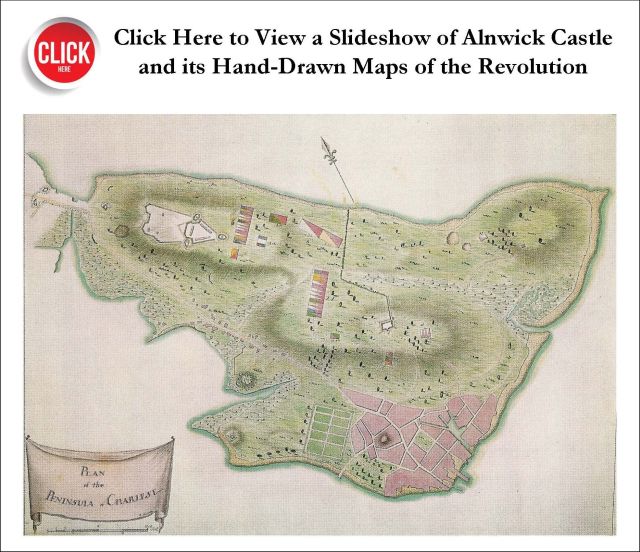 Begun in 1096 in the far Northeast corner of England, Alnwick Castle helped guard the frontier against incursions by Scottish clans. Today, some 800,000 visitors each year come to enjoy jousting, archery contests, and court jesters, as well as various Harry Potter-themed events and games including lessons in broomstick riding. Other visitors, more inclined to fine and decorative arts, can view one of the most important private collections in the U.K., with paintings by such artists as Titian, Van Dyck, and Canaletto, and ceramics by Meissen, Sèvres, and Minton. The gardens on the grounds are also considered some of the finest in England.

But for Americans, the real treasures at Alnwick are its one-of-a-kind maps of the American Revolution, drawn by hand during or just after important battles such as Lexington, Concord, Bunker Hill, Long Island, and Fort Washington.

In 1969, the 10th Duke of Northumberland, the owner of Alnwick, invited a team of researchers from American Heritage, Elizabeth and William Cummings, to help him catalogue his maps, which had lain largely forgotten in an old metal box. Some of the most important maps they found were published for the first time in our August 1969 issue.

His son, Hugh Percy (1742–1817), joined the British Army as a teenager and rose to the rank of Lieutenant General by the time he commanded some of the forces occupying Boston in 1775. Later a British peer and the 2nd Duke of Northumberland, he fought at the battles of Lexington, Concord, Long Island, and Fort Washington during the Revolution. Gen. Percy is widely credited with saving the British forces who were ambushed by the Americans at Concord by rushing reinforcements to the battle.

Percy wrote that, "During the whole affair, the rebels attacked us in a very scattered, irregular manner, but with perseverance and resolution, nor did they ever dare to form into a regular body. Indeed they knew too well what was proper, to do so. Whoever looks upon them as an irregular mob, will find himself very much mistaken. They have men amongst them who know very well what they are about, having been employed as rangers against the Indians and Canadians, and this country being very much covered with wood, and hilly, is very advantageous for their method of fighting."

"The rebels attacked us ... with perseverance and resolution," wrote Percy. "Whoever looks upon them as an irregular mob, will find himself very much mistaken."

Percy later fought at Long Island and Fort Washington. A Whig who sympathized with the Colonists to a degree, he resigned his command in 1777 due to disagreements with his superior, General William Howe. Percy returned to England with his priceless collection of maps of the battles in which he had fought. They still remain in the family.

There's another curious connection between the U.S. and the Percy family. A famous but "illegitimate" member of the family was James Smithson, whose bequest founded the Smithsonian Institution. The first Duke of Northumberland was Hugh Percy (1714–1786), an English peer, landowner, and art patron. Percy was actually born Hugh Smithson, the son of Langdale Smithson of Langdale, Yorkshire. After he married Lady Elizabeth Seymour, the Baroness Percy, he changed his name to Percy. James Smithson was the duke’s illegitimate son, the issue of an affair between Percy and Elizabeth Hungerford Macie.  (For an intriguing story of how Smithson's grave was robbed by Alexander Graham Bell and his remains brought to the U.S. for proper recognition, see "Digging up James Smithson" in the Summer 2012 issue of American Heritage.

"The Sparck of Rebellion"

by Douglas Brinkley
Badly disguised as Indians, a rowdy group of patriotic vandals kicked a revolution into motion

by George F. Scheer
Participants describe the opening of the American Revolution

by Frederic D. Schwarz
The Battle of Bunker Hill

With Little Less Than Savage Fury

by Thomas B. Allen
America’s first civil war took place during the Revolution, an ultra violent, family-splitting, and often vindictive conflict between patriots and loyalists

by David B. Little
On a new bridge that arched the flood Their toes by April freezes curled, There the embattled committee stood, Beset, it seemed, by half the world.

by Garry Wills
When the French Revolution broke out two hundred years ago this month, Americans greeted it enthusiastically. After all, without the French we could never have become free. But the cheers faded as the brutality of the convulsion emerged—and we saw we were still only a feeble newborn facing a giant, intimidating world power.