Research by American Heritage found that the Royal Navy lost 24 warships sunk or heavily damaged in October 1780, which must have affected Britain's ability to fight in the months before the surrender at Yorktown.

In doing research to support Eric Jay Dolin's important essay in this issue, "Did Hurricanes Save America?," we were not able to find any current histories of the period which provided an answer to that question.

We couldn't find a definitive list of British ships lost. In fact, all available lists of the losses in 1780 turned out to be incomplete, so we created one (see below).

The Royal Navy was stretched to the breaking point in the later years of the American Revolution. We forget that at the same time as thirteen of Britain's 17 colonies in North America were rebelling, the Crown was waging a worldwide war against the French, Spanish, and Dutch powers. The Royal Navy was called upon to defend the home islands in the English Channel and North Sea, and preserve territories of the Empire in the Caribbean, India, and elsewhere.

The French blockade of Gen. Cornwallis's army at Yorktown was crucial in the ultimate victory by the Americans and French. That blockade was made possible by the Comte de Grasse's victory in the Battle of the Chesapeake on September 5, in which the French held off a smaller British fleet trying to rescue Gen. Cornwallis.

The Royal Navy's loss of warships may have impacted the Battle of the Chesapeake, a crucial turning point in America's war for independence.

But surprisingly, historians have not asked a crucial question. Would the outcome of that crucial battle been different if the French had not outnumbered the British by 26 ships to 19?  What if the British had not lost 15 warships sunk a few months earlier in the hurricane season of 1780, the worst in recorded history?

To create a list of lost and seriously damaged British ships, we consulted original records of losses with Lloyds of London, the British government's Annual Register published in 1781 with details of naval actions of the previous year, and Ships of the Royal Navy, by J.J. Colledge and Ben Warlow.

British losses included the deaths of thousands of experienced officers and crew, including Commodore Robert Boyle-Walsingham (right), a popular member of Parliament, who drowned with 670 others on HMS Thunderer. 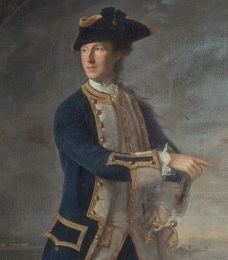 He had distinguished himself in the French & Indian War, and later in Parliament, where he warned that ''our present naval force was by no means adequate to the execution of our professed intentions.''

In addition to the 15 Royal Navy ships sunk during the hurricanes, at least another 9 were severely damaged. Five of these were large, two-deck ships of the line, or battleships, that would have required many months of repairs.

Did Hurricanes Save America?

by Eric Jay Dolin
The outcome of the American Revolution may have been affected by catastrophic storms in the deadliest hurricane season in recorded history.

The Battle of the Saintes

by C. S. Forester
No American ships were involved, yet on its outcome hung Great Britain’s recognition of our independence

Lafayette: A Hero Among Heroes

by Harlow Giles Unger
No figure in the Revolutionary era inspired as much affection and reverence as Gilbert du Motier, the Marquis de Lafayette

by Donald R. Canton
When their side lost the Revolution, New Englanders who had backed Britain packed up, sailed north, and established the town of St. Andrews, New Brunswick. It still flourishes.

by Frederic D. Schwarz
The Battle of Bunker Hill

"The Sparck of Rebellion"

by Douglas Brinkley
Badly disguised as Indians, a rowdy group of patriotic vandals kicked a revolution into motion

Robert Morris and the “Art Magick”