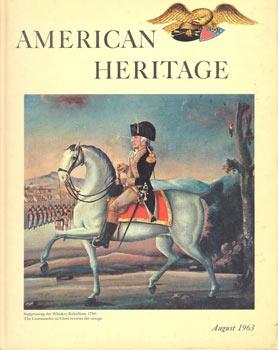 The Action Off Flamborough Head

His main-deck guns were silenced, his hold was filling fast, and one of his own ships was firing into him. Still John Paul Jones refused to strike

Sam Clemens, jack of many trades, hit the big town in 1864. Two years later, his true vocation discovered, he strode upon the national scene as Mark Twain

The whole center of the metropolis was ablaze: a hundred thousand people fled from their homes in panic

A Tax On Whiskey? Never!

To the backwoods distillers of Pennsylvania, that was like taxing the air they breathed. Rut the government was deadly serious: the Constitution itself was at stake

Into seven crucial years of American colonial history, a young Scots-American officer packed more of the stuff that makes heroes than perhaps a dozen more illustrious men. Yet today his name has slipped into almost complete obscurity

Robert C. Alberts
“I Have Been Basely Murdered”

So spoke the Union general a few minutes after he was shot in the crowded lobby of a hotel in Louisville. His killer, a fellow general and subordinate, never regretted the deed—and never paid for it

Howard H. Peckham
The Ordeal Of The Kanrin Maru

New evidence suggests that Manjiro, the first Japanese to see the U. S., not only played an unrecognized part in the opening of Japan, but also helped save the pride of its young navy from a watery grave

Emily V. Warinner
“It Is … A Small College … Yet, There Are Those Who Love It”

A distinguished newsman recalls a snowy night in wartime Paris, when a radio network briefly rescued from obscurity “one of the most extraordinary Frenchmen who ever lived”

Eric Sevareid
On Report, Gentlemen!
Meeting With The West

In the 1860’s, Japanese artists pictured the first Americans in a newly opened land. Their work was a mixture of keen observation and delightful misinformation

It was a lot of work, but somehow running a retail food store in the pre-cellophane era was rewarding

“Mr. House is my second personality,” said Woodrow Wilson early in his Presidency. Then, as the Paris Peace Conference proceeded, the friendship dissolved —for reasons that have never been fully understood. As he lay dying in 1938, Colonel House gave his explanation to President Charles Seymour of Yale, editor of his Intimate Papers , with the understanding that it remain secret for 25 years after his death. Here, for the first time, it is revealed.