Holding Down the Fort

Members of the Maryland Forces guard memories of a dramatic history at Fort Frederick, the best preserved fort from the former English colonies in America. 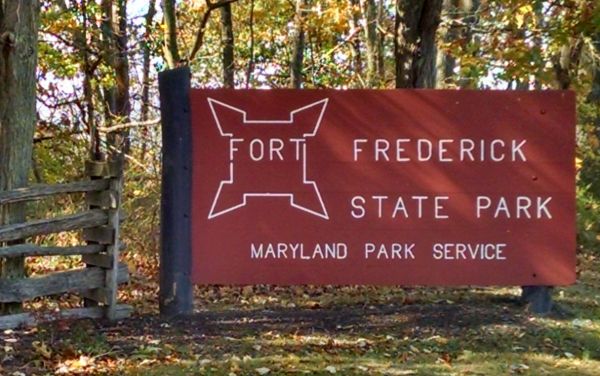 As I drove through the Maryland woods to old Fort Frederick, it was hard to believe that Col. George Washington once called this beautiful and tranquil scene a “theater of bloodshed and cruelty."

Hoping to photograph the massive stone fort that Saturday morning in the golden light of dawn, I snuck past a sign saying the park would not open until 8:00. The sun was just coming up, painting a golden edge on dark gray clouds that moved rapidly across a deep blue sky.

If I were caught trespassing, I hoped the ranger would sympathize with my good intentions.

Fort Frederick sits only a mile from busy Interstate 70, above the Potomac River in the mountains west of Hagerstown, Maryland. Even though it embodies so much history, the fort is well off the path of most travelers.

Erected in 1756 at the beginning of the French and Indian War, Fort Frederick is the best-preserved English stone fortification in the original Thirteen Colonies dating from before the Revolutionary War. (Castillo de San Marcos in St. Augustine, Florida, was built by the Spanish and Fort Ticonderoga in New York was originally French.) It was the cornerstone of Maryland’s defense against French and Indian attacks coming from the west and north.

I parked my car in the empty lot and walked around the Fort’s ancient stone walls that reached up six feet above my head, looking forward to a few moments of solitude communing with the past. George Washington visited the fort often, and this was the last bastion of civilization that Col. Braddock saw before marching off to his death 160 miles away in the wilderness south of present-day Pittsburgh.

After the sudden Indian attacks, “no less than 350 wagons, transporting the affrighted families, passed in the space of three days,” reported George Washington to the governor.

As I entered the huge gates with their hand-forged ironwork and thick, weathered wood, I was surprised to see someone already in the fort I thought was closed: a soldier in 18th Century uniform leaning against a wooden column, drinking from a mug and watching the early morning sunlight shining through a Colonial Maryland flag in the courtyard. When I asked what he was doing in the fort so early, Jim Rogers explained he’s a volunteer with the Joshua Beall Company of the Maryland Forces, dedicated to guarding the frontier and helping visitors relive the past.

The 1750s were a terrifying time. The frontier was a “theater of bloodshed and cruelty," wrote 24-year-old George Washington to Gov. Dinwiddie of Virginia in the summer of 1756. French and Indians raiding parties had “laid Maryland and Pennsylvania waste, as low as Carlisle.” English settlers “are flying with the utmost consternation” back to the east, he reported on August 5, 1756.

A month later, Washington reported that, "The frontiers of Maryland are abandoned for many miles below the Blue Ridge, as low as Frederick-Town, thro' which place I am credibly informed no less than 350 wagons, transporting the affrighted families, passed in the space of three days.”

I was surprised when Jim invited me in for breakfast. Entering the old barracks, I found a room of five groggy reenactors tending a fire and boiling coffee in an old iron pot hanging over flames in the fireplace. Everyone was already in uniform, except Sgt. Dustan Black, who was still sitting in long johns on the mattress in his hard wooden bunk.

A few minutes later, park ranger Bob Study came through the barracks door.  I kidded him, asking him how he let these guys stay for free in the state park. “Oh, they pay for it,” he said laughing. “We work them hard. The park can’t afford staff to talk with the visitors, so these guys meet with people all day long.”

We sat at the old wooden table and talked about the old Fort’s heritage, and I learned that the original stone walls are largely original.  When the Civilian Conservation Corps restored Fort Frederick during the Depression, they needed to add only a couple of feet of new stone to protect the top of the battlements. They reconstructed some of the wooden barracks and other buildings based on archaeological work.

After the ranger left, I ask the men what it is like to actually spend the night in the fort. I could see the authentic wooden bunks were tiny and uncomfortable. One of the soldiers admitted they added some foam rubber.

But the big question was: Did they hear anything strange, any spirits from those tragic years still lingering around?

The commander, Capt. Phil Woodbury, dressed smartly in a bright red officer’s jacket, quickly dismissed the idea of ghosts. But others in his company weren’t so sure.

“How do you explain the sounds of regularly paced footsteps when there is no one there?” asked Sgt. Black, who had worked as an employee in the fort for seven years.  “It’s not the expanding of the wood.  Many times I saw a cartridge belt or canteen out of the corner of my eye.”

Everyone fell silent at this comment, lost in thought.  We all knew the past is still very much with us. Sitting with these gentlemen in their authentic Colonial uniforms, in this hallowed place with a fire crackling in the old stone fireplace, the past seemed even more alive.

Pvt. Roy Long broke the silence by announcing he was off to get some French toast. We marched across the parade ground to a smoke-filled kitchen where a woman in simple white bonnet fried up bread in an iron skillet over a hardwood fire. Fruit and a stack of thick bacon sat piled up on plates nearby.

We were glad to do our part – for the entire weekend, not a single attack from French or Indians was reported. Under our care, the realm was safe.

by Sam Edwards
From ancestral homes of George Washington to World War II runways, there are many sites in the U.K. where you can encounter American's past.

by Peter Stark
Ambitious, temperamental, and passionate, George Washington learned the skills in the French & Indian War that laid the groundwork for the great leader that he would one day become.

“The Miraculous Care Of Providence”

Introduction to our Special Issue on George Washington

by Edwin S. Grosvenor
This special issue of American Heritage offers seven brilliant essays on George Washington, the Revolution, and the era of our nation's founding.

First In Toga, First In Sandals—

by John Lukacs
A fond, canny, and surprising tour of the town where the Constitution was born

by Edwin S. Grosvenor
Just before Christmas of 1783, General George Washington returned to Mount Vernon and looked forward to spending his remaining years at his favorite occupation, that of a Virginia country gentleman.

How to Get Elected

by Bernard A. Weisberger
The American system of choosing a President has not worked out badly, far as it may be from the Founding Fathers’ vision of a natural aristocracy

by John Lukacs
The Cold War was an anomaly: more often than not the world’s two greatest states have lived together in uneasy amity. And what now?