What Germans Said About the Americans

After the War, American intelligence officers combed through interrogation records and intercepted letters to compiled a report about what Germans thought of their former enemies.

The document, titled “Candid Comment on The American Soldier of 1917-1918 and Kindred Topics by The Germans,” included comments from soldiers, priests, women, village notables, politicians and statesmen.  Here are some highlights from the report. 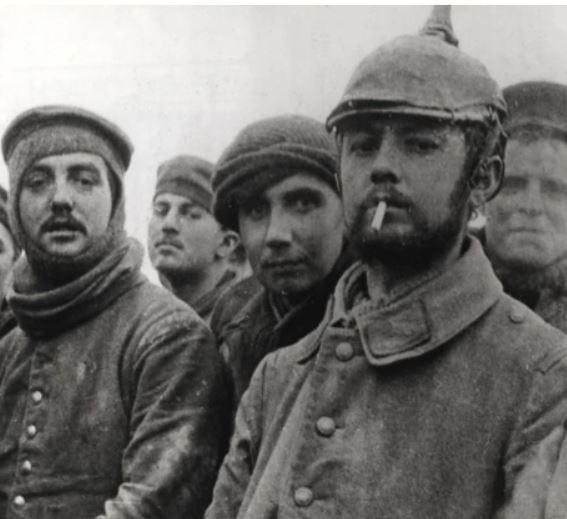 “The prevailing opinion in Germany before our entry into war, was, that American was a money hunting nation, too engrossed in the hunt of the dollar to produce a strong military force. But since our troops have been in action the opinion has changed, and he says that though Germany is at present a defeated nation, he believes that they would be victors in a war with any nation in the world with the exemption of the United States.”
—Karl Finkl of Bolingen

“Americans are good fighters with nerve and recklessness.”
—Arunlf Oster, Lieut. of Reserve

“The accuracy of American artillery fire ... could have been considerably improved upon.”
—Karl Diehl of Selters

“Many of our young girls have gone wrong ... Martha Strodter is engaged to an A-----. Isn’t she crazy?”
—Letter from P. Stanier of Grenzhausen

“I fought in campaigns against the Russian Army, the Serbian Army, the Roumanian Army, the British Army, the French Army, and the American Army. All told in this war I have participated in more than 80 battles. I have found your American Army the most honorable of all our enemies. You have also been the bravest of our enemies and in fact the only ones who have attacked us seriously in this year’s battles. I therefore honor you, and, now that the war is over, I stand ready, for my part, to accept you as a friend.”
—Chief of Staff for General von Einem, commander of the Third German Army

“I would like to go to America for a half year or so because it is certain that these people possess a secret method which raises the most common fellows into an individual who stands up boldly and moves about freely and unconcerned.”
—Letter from Frau Lisbette Schafer of Vallender to William Straube

“The Americans were what might be called bad prisoners. A group of 14 were brought in one day and when asked about their units refused to talk. They refused to work and talked back to the officers, much to the annoyance of the officers and the concealed delight of the men.”
—Paul Heinman

“The Americans [prisoners] were the chief complainers when the food was bad, which was always.”
—Pietro D’Paris

"[American] officers are not well dressed….All officers in the German army even when in active field service have one or more trunks and from time to time are allowed to leave for the purpose of obtaining uniforms.”
—Michael Hoffman of Rech

“The American army seems to me as fine a collection of individual physical specimens as I have ever seen. But from the standpoint of military discipline it is a mob, pure and simple. The men appear slouchy, the officers do not stand out from the men in appearance as they do in any European army.”
—Dr. Otto Schranzkmuller, former Prussian Municipal Official

“[American] troops lack the snap and precision of the German soldiers but ... the cordial relations between the officers and men more than make up for the lack of iron discipline.”

“The attitude of the American officer towards enlisted men is very different than in our army in which officers have always treated their men as cattle.”

“We were informed that your men were inclined to be rough, and the impression was left with us that we had a very serious time before us ... but today, after living 24 hours with them, we have no longer any apprehension. They are wonderfully mild mannered men and a great contrast to the domineering attitude of our own soldiers. Your troops, not even one, have spoken a single disagreeable word to anyone, and when we offered them wood for cooking and heating purposes they accepted with what seemed to be a certain shyness.”

—Statement of the Mayor of Kaschenbaum, which was occuped by American troops

“Children have constantly talked of the Americans’ arrival, and pictured them as a band of wild Indians, however, when they troops arrived, we were astonished at their behavior and pleasant attitude toward our people.”

"The American troops show much more consideration for the private rights of the inhabitants of the village than did the German troops."

"The Americans can very well serve as an example for our own troops whose behavior as they passed through here was none too good."

“The American Discipline is excellent, but the thirst for souvenirs appears to be growing.”

—A daily letter from Treves, Germany

“Many of our young girls have gone wrong since the A----- are [unclear] is almost hard to believe of some of them. Martha Strodter is engaged to an A-----. Isn’t she crazy?”

—Letter from P. Stanier of Grenzhausen

“They are like children and find their joy only in playing and eating which they do the whole livelong day ... of course there are exceptions as in anything else, but some of these men are so far beneath, that their origin from the ape can be plainly seen upon their faces. How the censors will rave when they read this letter, but I am only writing the truth. They are the wildest when they are after the girls. But thank God that they can at once recognize the difference between a 'decent' and a 'common girl.'"

—Translation of a letter from Hote Koetter, Neuwied.

by Fredric Smoler
A historian of the ancient world believes that in every era humankind has reacted to the demands of waging war in surprisingly similar ways, and that to protect our national interests today Americans must understand the choices soldiers and statesmen made hundreds and even thousands of years ago

Where Berlin And America Meet

by Fredric Smoler
Our common history isn’t all pleasant, but seeing it firsthand is deeply moving

The Great North Sea Mine Barrage

by Daniel P. Mannix 3d
An extraordinary World War I naval operation is recounted by the commander of a decaying coastal steamer crammed with a terrifying new explosive

by Jeffrey B. Miller
American volunteers distributing food to starving Belgians witnessed the dramatic deportations, when an estimated 120,000 men were taken to factories in Germany.

The Wealth Of The Nation

by Adam Smith
The most influential economist in the United States talks about prudence, productivity, and the pursuit of liquidity in the light of the past

by Richard O’Connor
SENT ON A HOPELESSLY VAGUE ASSIGNMENT BY WOODROW WILSON, AMERICAN SOLDIERS FOUND THEMSELVES IN THE MIDDLE OF A FEROCIOUS SQUABBLE AMONG BOLSHEVIKS, COSSACKS, CZECHS, JAPANESE, AND OTHERS

Out of the Blue

by Roger J. Spiller
Walt Whitman said, “The real war will never get in the books.” The critic and writer Paul Fussell feels that the same sanitizing of history that went on after the 1860s has erased the national memory of what World War II was really like.