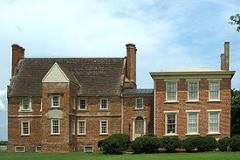 It's not really a castle, nor was it the home of rebellion leader Nathaniel Bacon, but it is one of the oldest houses in America, built in 1665. Some of Bacon's men may have stayed at the home during the 1676 rebellion against Gov. Berkeley. This home is a rare example of such a unique architecture in American building.