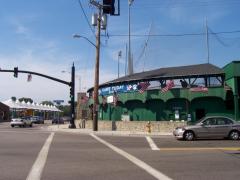 First used as a baseball sandlot in 1908, Cardines Field has hosted baseball in Newport for over a century. Originally named Basin Field, the ballpark was renamed in honor of Bernardo Cardines, the first Newport man to die in World War I.