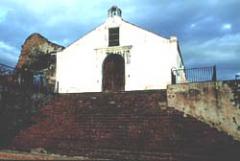 Dominican friars built the Convento de Porta Coeli in 1609 at the crest of a hill in what is now San Germán. During the 18th century the Convento was reconstructed and a church built next to it. The single nave church was constructed of rubble masonry with stucco surfaced walls and a dramatic wood truss roof. Today, only ruins--a gable-end wall and belfry attached to the church--remain of the old Convento. Restored in 1960, the Converto de Porta Coeli now houses a Religious Art Museum.