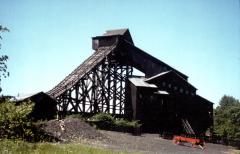 Eckely was one of hundreds of small company mining towns, or "patches," built in the anthracite region of Pennsylvania during the 19th century. The mining firm of Sharpe, Weiss, and Company bought the land in 1854, constructing a town there to support the needs of their workers, when in reality it allowed them to dominate their lives in every way. The village grew to 1,000 inhabitants at one point, made up of an ethnic mosaic of Welsh, German, Irish, and other immigrants. When strip mining began to take over underground mining, the village declined and today it serves as a preserved look at the way of life of 19th century anthracite miners.