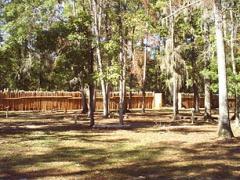 In 1813, people on America’s southwestern frontier were fearful. The Redstick faction of the Creek Indian Nation opposed growing U.S. influence in the area and had voted for war. However, Creeks living in the Tensaw area had intermarried with the European and American settlers and were close allies.

Early in the summer, local American militia and allied Creeks attacked a group of Redsticks at Burnt Corn Creek. Tensions grew and many families along the Tensaw, Alabama and Tombigbee rivers took refuge in quickly fortified sites. On this site, they built a stockade around Samuel Mim’s plantation. Later, volunteer troops from Mississippi helped enlarge it. But as weeks passed without an attack, the people at Fort Mims grew complacent.

At midday, August 30, about 700 Redstick warriors attacked the fort. They entered through an open gate and fired into the fort through poorly designed gun ports. News spread quickly throughout the South. Troops from surrounding states and territories joined to crush the “Creek War” by the following summer.” On August 9, 1814, the Creek leaders met at Fort Jackson near Wetumpka and ceded 23 million acres of their land to the United States.