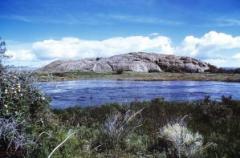 The rock derives its name from the fact that it lies directly along the route of the Emigrant Trail and that emigrant wagon parties bound for Oregon or California, which usually left the Missouri River in the early spring, attempted to reach the rock by July 4th (Independence Day) in order to reach their destinations before the first mountain snowfalls.

During the period of westward emigration on the trail (from 1843 to 1869), it was common for emigrants to carve their names in the granite rock, especially near the summit. Other emigrants left behind messages, sometimes for parties behind them on the trail, in axle grease. Many instances of such carved graffiti are visible today at the summit of the rock, which is accessible by an easy free climb up the surface of the rock.

Off of Oregon Trail Rd.