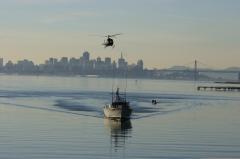 Liberty, PTF-26, is the last of the Vietnam-Conflict "Fast Patrol Boats". The PTFs were directly derived from the World War II PT Boats. The first two PTFs built were post WW II PT Boats, the next twenty were 80 foot wood boats, known as the "Nasty" class, and the last four PTFs were 95 foot aluminum boats known as "Osprey" class. Today, of the four Osprey class boats, only 2 survive, PTF-23, and of course, Liberty, PTF-26. Liberty was designed with nine separate watertight compartments, and can withstand holes in two compartments below the waterline without sinking. Furthermore, all openings to the outside can be completely sealed to prevent water from entering. The stack houses the air intake for the engine room, so, even in very rough seas, the engines are protected from waves and spray. There were originally two l8-cylinder Napier Deltic diesel engines, each of 3100 Bhp, which, during a time trial in the 1970s, brought Liberty to a top speed of 51 knots. The two tall antennas are SSB (single-side band) antennas that are approximately 45 feet off of the water.

The boat is undergoing restoration currently. Visitors can call ahead for an appointment and a member of the restoration staff will offer a tour through the boat.

Call ahead for appointment