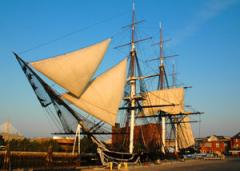 The USS Constitution was first launched in 1797. It served in the Quasi-War against France, the First Barbary War, and the War of 1812, during which it earned its nickname for the resilience it displayed in a battle against a British warship. It is still in commission, operating in ceremonial roles as a "ship of state." The USS Constitution Museum is nearby on Pier 2.