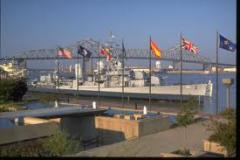 This extremely rare example of an American World War II Fletcher class destroyer is permanently docked across the street from the Old State Capitol on the Mississippi River.

Having undergone almost no alterations since the end of World War II, the U.S.S. KIDD has become one of the most important tourist attractions in the city of Baton Rouge. Altogether, the KIDD earned 12 battle stars while being used in the Pacific during both World War II and the Korean Conflict. The U.S.S. KIDD was part of Destroyer Squadron 48 of World War II, which was composed of nine Fletcher class destroyers, four of which were constructed at the Kearney Shipyard in New Jersey. The Fletchers were the backbone of the Pacific destroyer force during World War II. Small, fast, fighting ships, they were used to screen task forces, escort convoys, bombard shore positions and deliver torpedo attacks. No aircraft carrier or battleship ventured into enemy waters without her escorting destroyers ahead. On April 11, 1945, during the battle for Okinawa, the U.S.S. KIDD suffered a kamikaze attack when a Japanese pilot targeted and crashed into her, killing 38 crewmen.

After the end of the War, all of the other destroyers of the 245 Fletcher and Sumner class besides the U.S.S KIDD were modernized. This was done by the replacement of the rear island of the ship with a helicopter platform, the addition of side launching torpedo tubes, and the installation of hedgehog depth charge launchers. Thanks to the dedicated efforts of the veteran sailors of the Destroyer Squadron 48 Association, and the people of Louisiana, the ship was saved as a museum-memorial. Towed from Philadelphia to her new home in Baton Rouge in 1982, the 2,050-ton destroyer underwent restorative efforts to get her up to her 1945 VJ Day appearance. The exhibition of the vessel is unique due to the rise and fall of the Mississippi River-which may range up to 45 feet in a year. Because of this fluctuation in water depth, a special mooring system was designed.