Faces of Slavery: A Historical Find

The six previously unpublished daguerreotypes on the following pages represent an extraordinary historical find. Made in Columbia, South Carolina, in 1850 at the behest of Louis Agassiz, the celebrated father of American natural science, they are among the earliest known photographs of Southern slaves. So far as we know they are also the earliest for which the subjects are identified by name and by the plantation on which each one toiled. And, perhaps most remarkable, all but one of the slaves they depict were born in Africa, and three can be identified with the tribe or region from which they came.

The men and women in these lost daguerrotypes suffered pain and humiliation, but gained a kind of immortality as memorably real survivors of a cruel era.

These pictures, part of a cache of fifteen, might have remained unknown had it not been for Elinor Reichlin, a former staff member of Harvard’s Peabody Museum of Archaeology and Ethnology, who found them early last year in an unused storage cabinet in the museum’s attic. Each daguerreotype case was embossed “J. T. Zealy, Photographer, Columbia” and several had handwritten labels. Nothing further was known about them. Ms. Reichlin spent months tracking down their story, and in the following article she explains just how and why these poignant images were made.

Until the late 1830’s, American scientists had little reason to question the Biblical explanation for mankind’s racial diversity. They assumed that all men were descended from the sons of Noah, who had dispersed across the world as the waters of the Great Flood receded. Racial differences were the result of centuries spent in different climates.

Then, Dr. Samuel Morton, an eminent Philadelphia anatomist, published two books, Crania Americana (1839) and Crania Aegypticus (1844), which seemed to cast doubt on mankind’s unity. After examining hundreds of ancient and modern skulls from both the Old World and the New, he noted that each region had been peopled by distinct races since antiquity. The Biblical time allotted to man’s dispersal was far too short to account for such an ancient and extensive settlement of two widely separated continents by distinct races. Therefore, he reasoned, “mankind” must not be one species but several, each specially created by God to suit its own geographical environment. 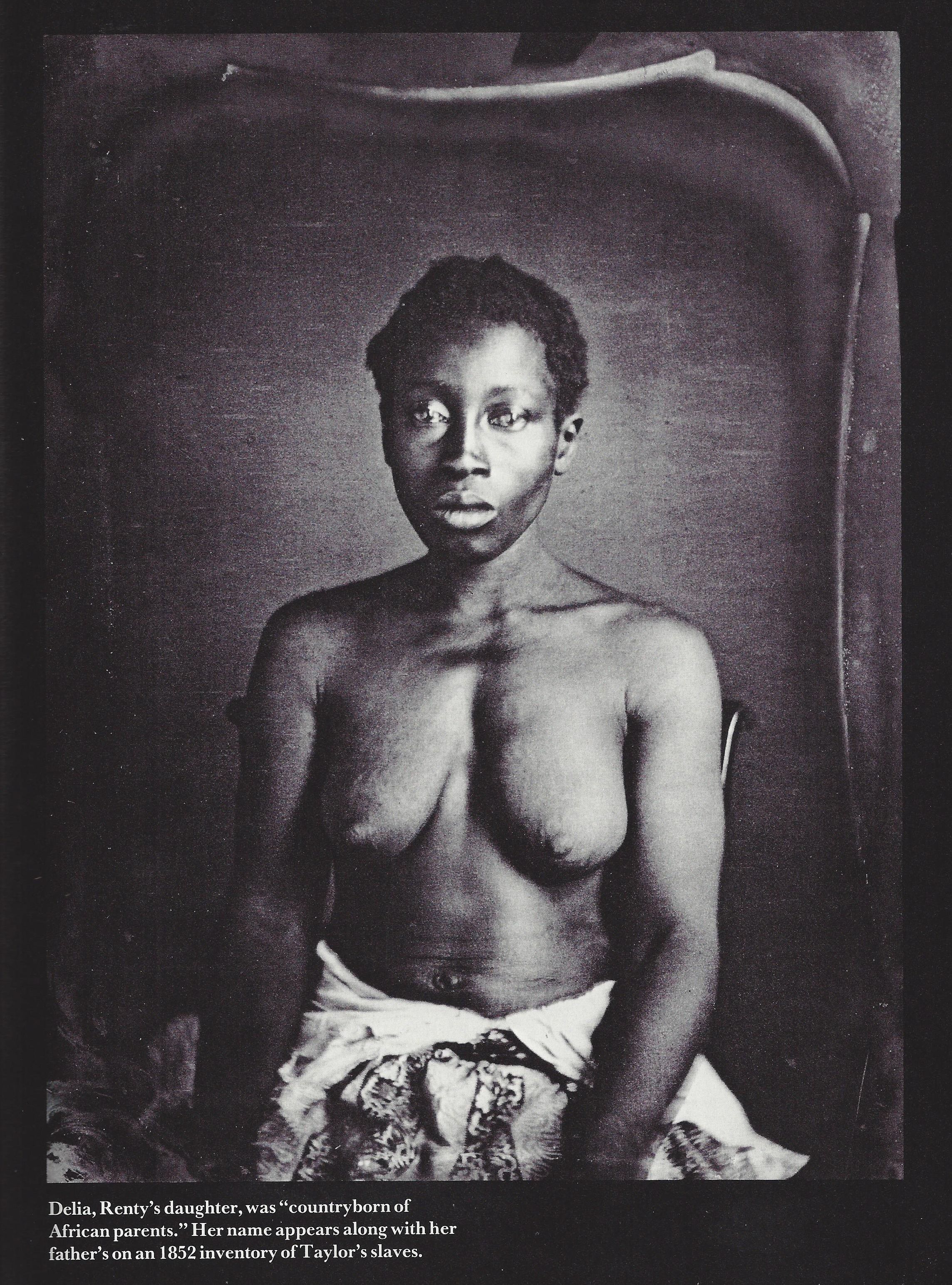 Abolitionists decried Morion’s theory; so did many religious persons, who considered it an attack on Scriptural truth. But it was eagerly seized upon by defenders of slavery who saw in it a “scientific” basis for racial inequality. The battle lines were drawn.

The most prestigious convert to the doctrine of separate creations was Louis Agassiz, who arrived from Switzerland in 1846, already persuaded from fossil studies that all animal species except man had been separately created and confined to the “zoological province” in which they lived. Talks with Morton and his followers helped convince Agassiz that the races, too, were different species. In March of 1850, before a meeting of the Association for the Advancement of American Science at Charleston, South Carolina, he declared that the races were “well marked and distinct” and did not originate “from a common center … nor from a common pair.” 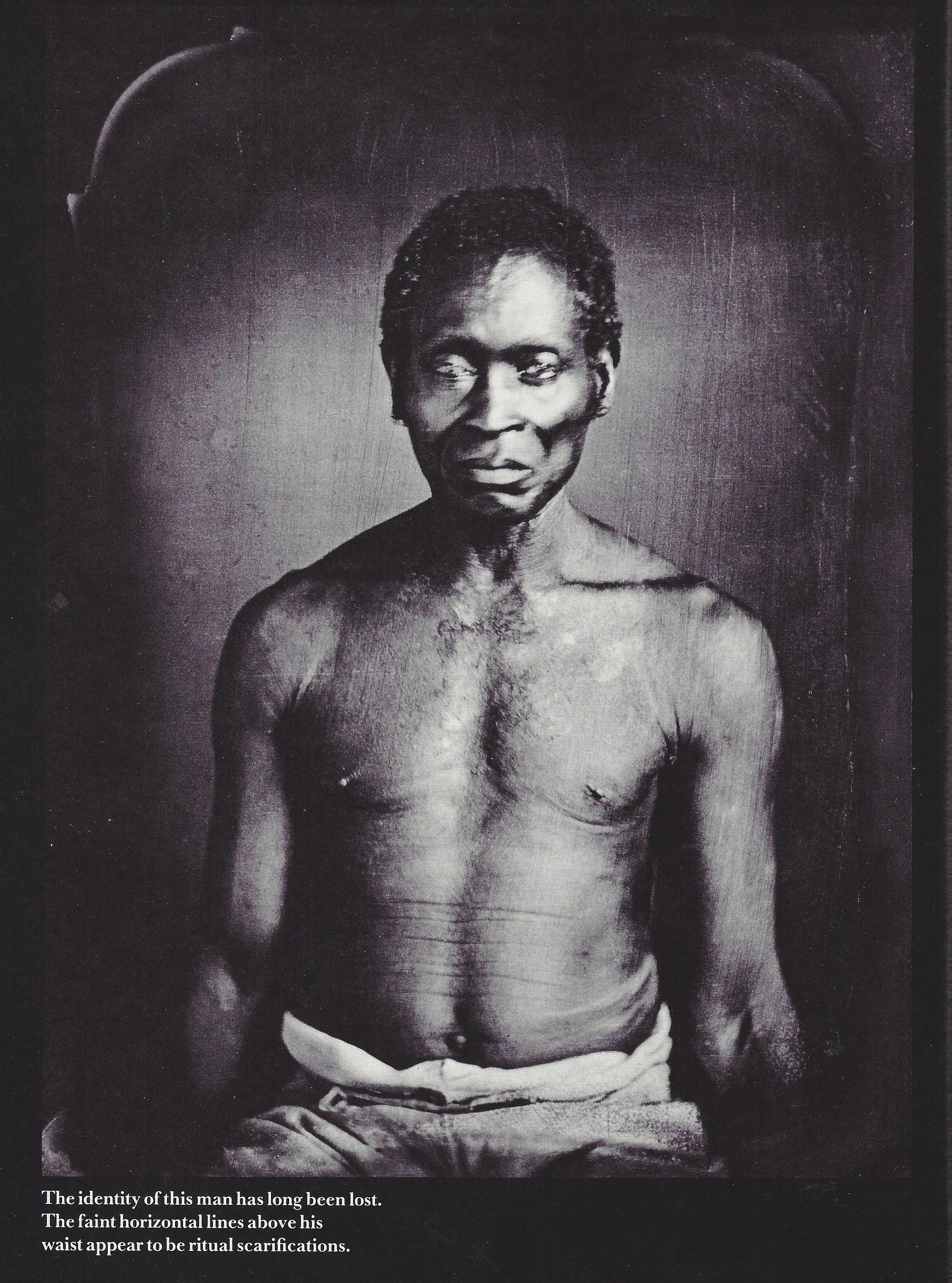 Special creationists were jubilant: ”… with Agassiz in the war,” wrote one, “the battle is ours.” Their opponents were stunned. Agassiz was accused of unorthodoxy and was attacked for advocating slavery. Such assaults bewildered him; Agassiz was, in fact, deeply religious and largely indifferent to politics. Scientists, he believed, had a duty to search for truth wherever it led them, regardless of political and social consequences.

His method was to “study nature, not books,” and after the Charleston meeting he traveled to Columbia to conduct field research on race. His host was Dr. Robert W. Gibbes, an admirer of Morton. Together, Gibbes and his illustrious guest traveled to nearby plantations where, Gibbes wrote, “Agassiz was delighted with his examinations of Ebo, Foulah, Gullah, Guinea, Coromantee, Mandrigo and Congo Negroes,” and found enough evidence to “satisfy him they have differences from other races.” Agassiz concentrated exclusively on African-born slaves and their first-generation offspring. By means of this restricted sample he hoped both to define the anatomical variations unique to “the African race” in its original form and to establish a standard against which to measure the permanence of racial characteristics among American-born slaves of more remote African ancestry who had been exposed to a temperate climate for several generations. (African-born slaves in fact constituted only a tiny fraction of the U.S. slave population in 1850, more than four decades after Congress declared the importation of slaves illegal; some of those whom Agassiz examined must have been smuggled into America as part of the illicit trade that continued until the Civil War.) 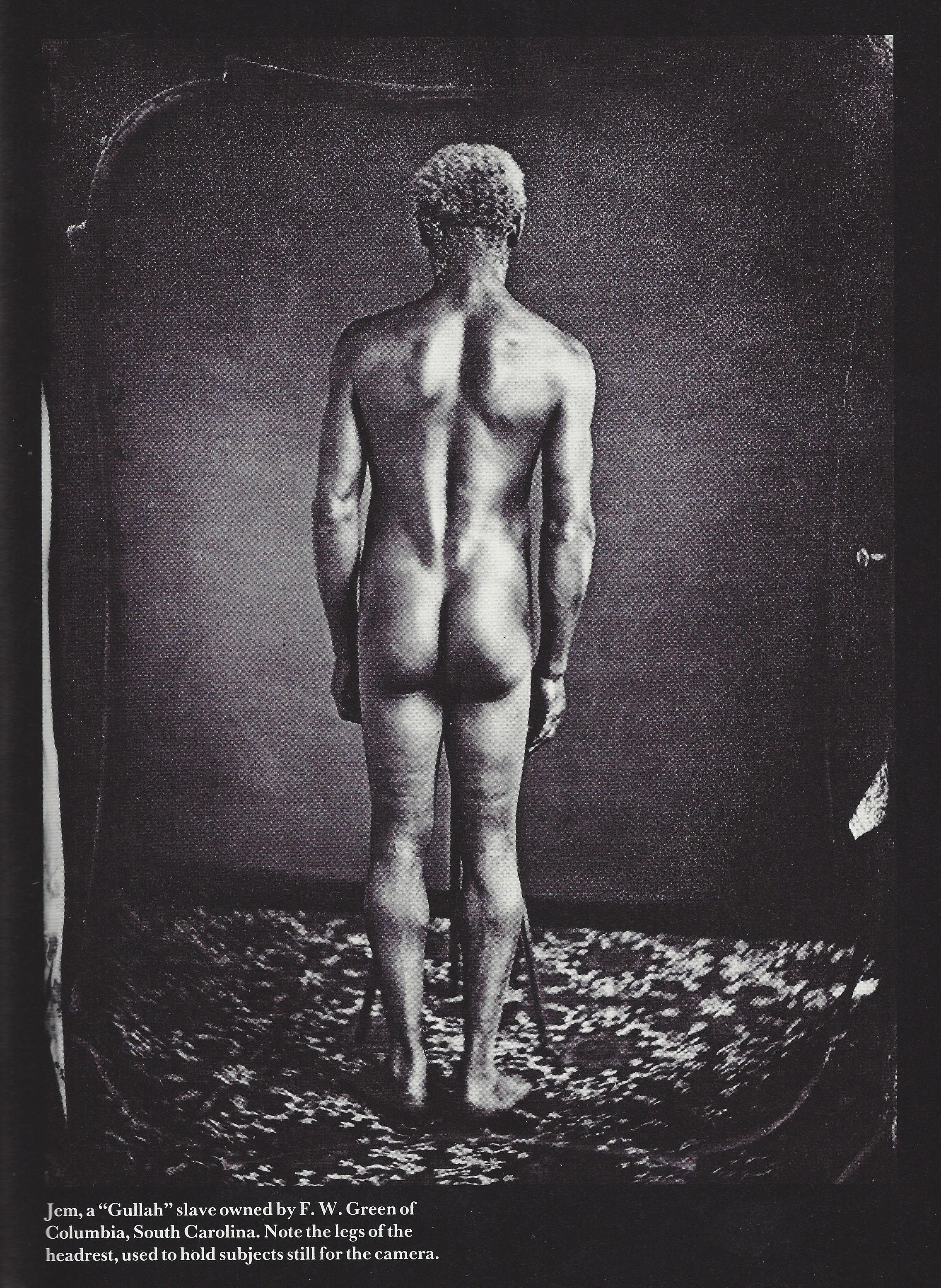 His firsthand studies completed, Agassiz departed from Columbia at the end of March, but he evidently left instructions for Gibbes to gather corroborative photographic evidence — one of the first such instances in scientific history. Gibbes enthusiastically complied, arranging for J. T. Zealy to photograph the slaves Agassiz had examined, then posing each one nude to point up anatomical details in which the scientist had shown special interest and, finally, labeling each image with the subject’s first name, tribe, and owner.

Gibbes was pleased with his work. “I have just finished the daguerreotypes for Agassiz of native Africans of various tribes,” he wrote to Morton in June. “I wish you could see them.” 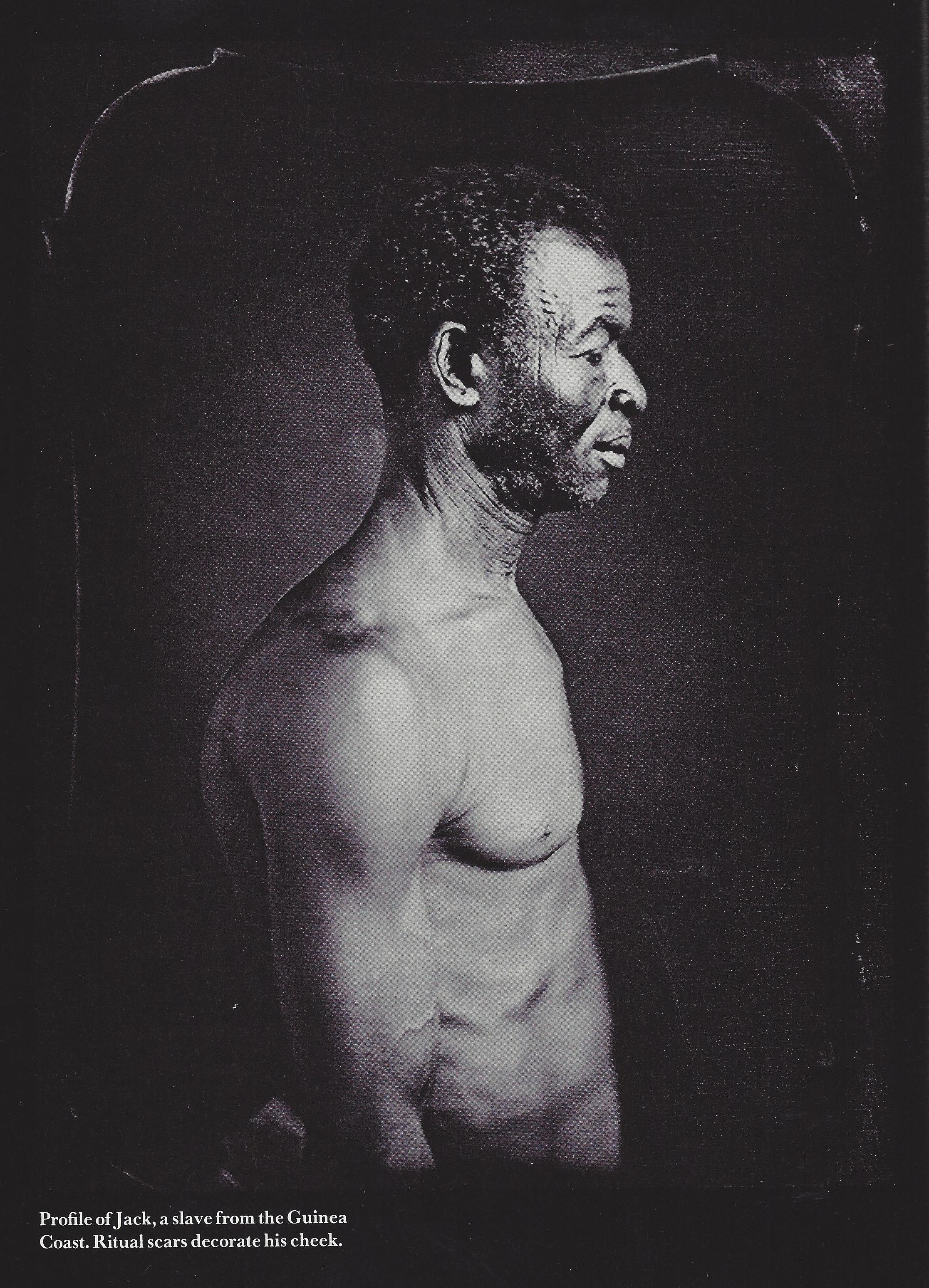 Agassiz was probably satisfied as well; certainly his Columbia visit had reinforced his belief that Africans were a distinct species.

Although Agassiz never wavered in his belief, the theory of special creations was soon to be supplanted by the theory of evolution propounded by Charles Darwin in his Origin of Species (1859). Modern anthropologists, of course, are unanimous in their belief that mankind is a single species. 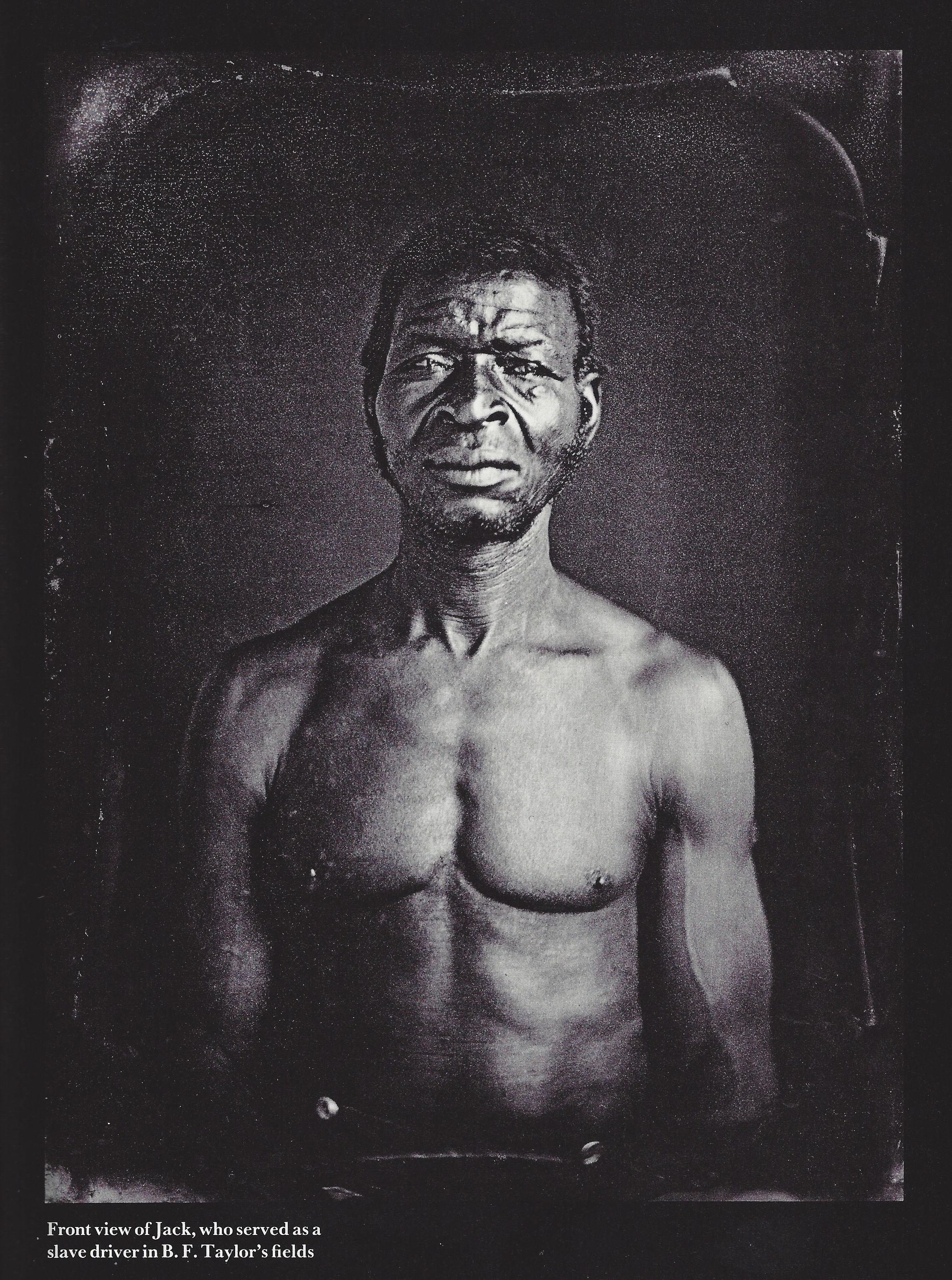 Agassiz’ theory was discredited by the mid-1860’s, but the daguerreotypes survived; and it is ironic that these pictures, made to demonstrate the supposed inferiority of their subjects, instead conferred a kind of immortality on the men and women we know only as Renty and Delia, Jem and Jack.

It was no consolation for the humiliation they endured both as slaves and as objects of scientific curiosity, but a rare gain for those who now encounter these people as memorably real survivors of a painful epoch.

The First To Secede

by James W. Loewen
South Carolina severed ties with the Union not out of concern for states' rights but because of slavery

by Edwin S. Grosvenor
The famous photographs at Harvard, first published in American Heritage in 1977, are at the center of a difficult debate over who owns the images.

“We Are Going To Do Away With These Boys …”

by Pete Daniel
The black laborers on John Williams’ plantation never seemed to leave or complain. It took some digging to find out why

The Mystic Vision Of Everett Scholfield

The Strange Fate Of The Black Loyalists

by R. D. Eno
Thousands of them sided with Great Britain, only to become the wandering children of the American Revolution

Relics Of The Horn

by Norman Brouwer
A Photographic Portfolio

by Richard Brookhiser
Should our leaders say they’re sorry about slavery? About Indians? About their personal behavior? Such questions are hardly new; public contrition has been a national preoccupation for centuries.