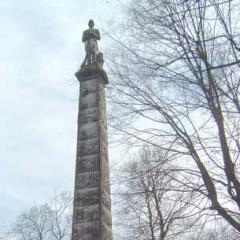 Located on Bethel Avenue and down the road from the Mabry-Hazen House, the Bethel Cemetery contains more than 1,600 Confederate dead, including three hundred soldiers who were killed in the battle of Fort Sanders. In addition, around 50 Union soldiers and 20 Civil War veterans are interred here. The monument to the Confederate dead was erected by the Ladies Memorial Association and was unveiled on May 19, 1892. The cemetery was cared for and maintained by the Winstead family for a number of years, and the last private owner, Miss Mamie Winstead who died in 1989, willed the cemetery to the Hazen Historical Museum Foundation. The white frame house located on the property was built in 1886 due to efforts of the second sexton of the property, William H. Winstead, a Confederate veteran who lost his leg in the Battle of Gettysburg.