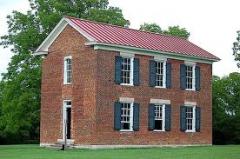 The Boiling Spring Academy is a restored 1830 one room school house located in Primm Historic Park on Moores Lane.

On this site, prehistoric Native Americans lived and left their mounds as relics of the Mississippian Period. Many years later pioneer settlers carved their civilization out of this wilderness. They were followed by flourishing plantations where antebellum planters educated their children in the Boiling Spring Academy which also served as a church.