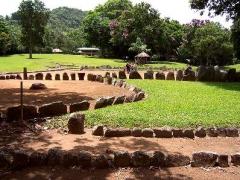 When the first Spaniards arrived on the island more than 500 years ago, they encountered thousands of Taíno Indians-the most recent of a series of inhabitants that had populated the Caribbean region for thousands of years. All the Indian cultures shared a ceremonial ballgame-sometimes described as similar to lacrosse or soccer-with their Meso-American cousins.

More than 30 of the courts where these games were played can be found in the mysterious Caguana Indian Ceremonial Park near Utuado, in the center of the island. These courts, called bateyes, are believed to be part of the most sacred Taíno area in the West Indies.

Excavation began in 1915 and, over the years, the Institute of Puerto Rican Culture has restored many of the bateyes. Monoliths and petroglyphs carved by anonymous hands can be seen among the rocks and stones. Knowledgeable visitors seek out La Mujer de Caguana, a rare petroglyph of a woman with the legs of a frog, wearing an elaborate headdress!

A small museum contains Indian artifacts, archaeological exhibits and a botanical garden featuring the plants the Taínos harvested for food, such as sweet potatoes, cassava, corn and yautía. The trees that were used for building materials, such as mahogany, ceiba, tabonuco, and ausubo can be seen in their natural setting.

The park is a two-hour drive west of San Juan, taking you through karst country and weaving in and out of the mountains surrounding the ceremonial center.