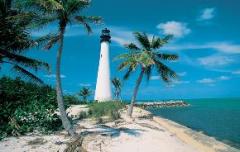 The Cape Florida lighthouse is one of the most celebrated landmarks owned by the State of Florida. The historic compound in Bill Baggs State Park and Recreation Area includes the newly restored, 95-foot white-brick tower and a replica of the lighthouse keeper's 1825 cottage, delighting visitors as well as residents of this subtropical island of Key Biscayne. Graceful coconut palms line the walkway toward the ocean and grand historic monument.

A climb to the lantern room affords a vast panorama of the lush island with its long stretch of sandy beaches and the ever-changing tropical seas. Against a background of aquamarine waters, leaping dolphins and giant rays, schools of colorful fishes, occasional sharks, diving pelicans, and other tropical birds may be seen. You will view ships from international ports plying the deep blue of the powerful Gulf Stream, enormous cruise ships on the horizon, and luxury yachts, deep-sea fishing boats, and bobbing sailboats riding the waves.

The tranquility surrounding the entire state park - and especially the historic compound - belies the dramatic and sometimes violent past when hurricanes, fire, and the Seminole Wars swept through the region.

The original lighthouse and cottage, built in 1825, were attacked and burned in 1836 by Seminole warriors protesting U.S. presence in the South Florida wilderness and resisting deportation from Florida to the West. When the lighthouse was rebuilt in 1855-1856, it was extended from 65 feet to its present height, and wooden stairs were replaced with 119 spiraling iron steps to the top.

Today rangers and guides on scheduled tours take visitors through the furnished air-conditioned cottage and the cookhouse (now an air-conditioned video mini-theater) as an introduction to Cape Florida lighthouse history and Key Biscayne.

The lighthouse rises on the southernmost tip of Key Biscayne overlooking the rest of the more than 500-acre Bill Baggs State Park. Visitors may want to picnic, sunbathe, swim, fish, or follow paths through the ecologically restored interior, traveling on foot or bicycle from beachside to bayside on the Key Biscayne Heritage Trail.