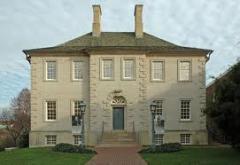 This 18th-century home was used by General Braddock as his headquarters during the French and Indian War.

Located in Old Town Alexandria, Carlyle House was completed in 1753 by a wealthy Scottish merchant for his bride, Sarah Fairfax of Belvoir. Their home quickly became a center of social and political life in Alexandria and gained a foothold in history when British General Braddock made the mansion his headquarters in 1755. Braddock summoned five colonial governors to meet at the home to plan the early campaigns of the French and Indian War. The Carlyle House is architecturally unique in Alexandria as the only stone, 18th-century Palladian-style house.