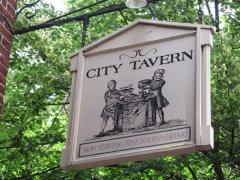 The Tavern was built "for the convenience and credit of the city" by a group of eminent Philadelphians who felt that their hometown deserved a fine tavern which reflected its status as the largest, most cosmopolitan city in British North America. When the Tavern was completed in 1773, it was one of the most elegant buildings in the city.

From that time until the close of the century, City Tavern knew the patronage of the great and near-great of the American Revolution. It became the practice of the members of the Second Continental Congress to dine together each Saturday at the Tavern. Eight of the delegates, Randolph, Lee, Washington, Harrison of Virginia, Alsop of New York, Chase of Maryland, and Rodney and Read of Delaware chose to form a "table" and dine there daily.

No doubt, matters of momentous importance were discussed and decided over a glass of Madeira and steaming roast of venison. After the war, the Tavern settled into a more sedate existence that was not interrupted until the opening of the Constitutional Convention in 1787. Once again, these leaders enjoyed the hospitality of the City Tavern. It was fitting that after the adjournment of the convention in September, delegates gathered there for one final dinner.

The City Tavern is still a functioning restaurant with the aim of recreating the cultural experience of 18th century America in both food and décor.