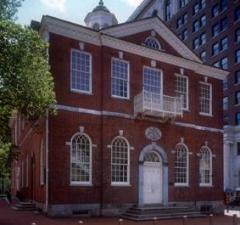 Constructed in 1787 - 1789 as the Philadelphia County Court House, this building served as the meeting place of the U. S. Congress from 1790 to 1800. The House of Representatives met on the main floor, while the Senate assembled upstairs. Among the historic events that took place here were the presidential inaugurations of George Washington (his second) and John Adams; the establishment of the First Bank of the United States, the Federal Mint, and the Department of the Navy; and the ratification of Jay's Treaty with England. During the 19th century, the building was used by Federal and local courts. The building, inside and out, has been restored as much as possible to the period of time when the building was the U.S. Capitol.

Located on the corner of Chestnut and 6th Streets. The building is open year round, though hours vary by season. Visitors are admitted free of charge on a first-come, first-served basis. Ranger led programs are provided.