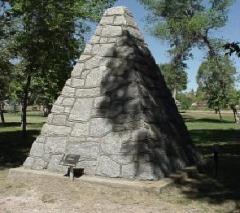 On August 28th, with the column located on Prairie Dog Creek, Pawnee Scouts arrived with information of an Arapahoe village encamped on the Tongue River. Following a night march with 250 soldiers and 80 Pawnee Scouts, Connor's force attacked Black Bear's Arapahoe village while the Indians were in the act of packing to move. The soldiers overran the camp and pushed the Indians 10 miles up Wolf Creek. The Indians fought a desperate rear guard action, protecting their families and eventually forcing the soldiers to withdraw. During this action, other soldiers burned the camp and its supplies, making it a funeral pyre for their dead. Indian casualties included 64 warriors and several hundred ponies. As the soldiers withdrew the Indians advanced, recapturing several of their ponies, and continued harassing the column for several days. Connor's column marched back to Fort Laramie following the establishment of Fort Connor on the Powder River near present day Kaycee.

The visitor is encouraged to enjoy the peaceful surrounding of this campground/picnic area. It provides a base for short visits to surrounding historic sites and the Big Horn Mountains. Fishing is excellent as the Tongue River abounds in trout and whitefish.