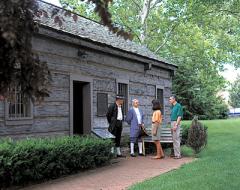 Although Constitution Square Historic Site is one of the smallest state parks, it looms large in the history of Kentucky. On June 1, 1792, Kentucky became the fifteenth state of the Union when delegates of the Kentucky statehood convention adopted the commonwealth’s constitution. This historic event took place in Danville, Kentucky at a place now known as Constitution Square. This three-acre site became part of the state parks system on October 15, 1937. Emma Weisiger donated the land for the park in memory of her brother John G. Weisiger and named it the John G. Weisiger State Park.

Known as Kentucky’s first courthouse square, Constitution Square has both original and reconstructed buildings that reflect the early days of Kentucky’s history. The log post office is original. Built before 1792, this structure served as the first post office west of the Allegheny Mountains. The courthouse, jail, meetinghouse, and stocks are reconstructions. The original site of the post office was on West Walnut Street. In 1950 the Danville and Boyle County Historical Society moved the building to its present location. Contractors working on the reconstructed buildings followed as closely as possible specifications for the original structures. Old court records for example called for the jail to have nine-inch thick logs.

Restoration of Constitution Square began in 1937 and continued through 1941 when World War II brought a halt to non-essential construction projects. Work began again in 1948 and continued through 1955. The inclusion of landscaping and walkways made the site more attractive. In the center of the park is Governor’s Circle, honoring Kentucky’s first governor, Isaac Shelby (1750-1826).

The creation of Constitution Square evokes the history of Kentucky’s birth as a state. A series of ten conventions held from December 27, 1784 to April 19, 1792 worked out the details of statehood. These historic meetings dealt with the unique difficulties facing a frontier society. The first constitution of Kentucky would also set an important precedent for other states on the western frontier of the United States yet to be created. The delegates to the conventions knew that the constitution that they had written might need to be changed. The authors of the constitution inserted a clause that stated within five years the electorate should have the privilege of voting to reassess the document.

The 1792 constitution had many virtues. It was brief and to the point. It placed power in the hands of the duly elected legislative and executive branches of government. For its time, the 1792 constitution seemed liberal and progressive. The document clearly established the rights of free men in the political makeup of the new state. The privileges and rights of free male citizens had clear definition in 26 sections of the first constitution. Nevertheless, it did have some negative aspects. The slave owners of Kentucky clearly had exercised their influence over the authors of the constitution. The omission of the office of lieutenant governor caused concern. The first constitution also lacked a well-defined judicial system. These problems would cause the Kentucky constitution to be replaced in 1799.

Danville has seen much of Kentucky’s history. Established in 1784, the community soon grew in importance as a thriving frontier settlement. Not only did the founders of the commonwealth of Kentucky choose the town for the statehood conventions, Danville could also boast being the site of the first successful ovarian operation in the world. In 1809, Dr. Ephraim McDowell (1771-1830) removed a twenty-two pound tumor from an ovary of Jane Todd Crawford (1763-1842) who originally thought she was pregnant. McDowell advised Crawford of the extreme danger of the operation, as well as the likelihood of an early death if she did not have the tumor removed. She decided to undergo the operation at a time when anesthetics were not in use. She rode on horseback sixty miles from her home to Danville to have the surgery. Reciting the Psalms to give her courage, she submitted to a twenty-five minute operation that made history. Not only did she recover, she rode back to home and lived another thirty-two years.