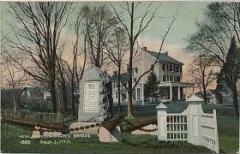 This was the site of the only Revolutionary War battle fought in Delaware.

On September 3, 1777, the Battle of Cooch's Bridge was fought here, and it would end up as the only battle from that war to be fought within Delaware's boundaries. According to tradition, the new 13-star flag, the Stars and Stripes, was first unfurled during action here. This site has no facilities or contacts; visitors explore the area on their own.