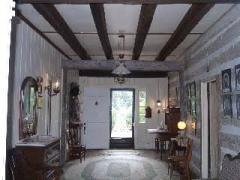 Davies Manor Plantation is a remarkably preserved historic site within an urban area. In addition to the house and grounds, a small archaeological mound of potsherds was recently unearthed, and old Indian trails still cross the property. Although owned by the Davies family since mid-19th century, it is unknown when or who built the original one room log cabin (parlor). In 1975, the Manor house was placed on the National Register of Historic Places. The next year, the Tennessee Department of Agriculture awarded the plantation A Century Farm Certificate, recognizing that the same family owned and operated the land as a farm for one hundred years or more. Davies Manor also received a Certificate of Merit from the Tennessee Historical Commission for "having made significant contributions to the preservation of the historical and architectural history of Tennessee."