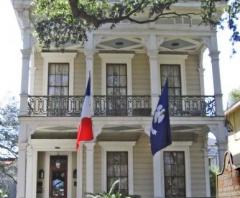 Built during the original development of the Esplanade Ridge Neighborhood, the Degas House dates from the early 1850s. During these years, directly prior to the Civil War, the South experienced a boom in both wealth and population. New Orleans, in particular, thrived in this climate of affluence and became the fourth largest city in the United States. The city responded to the pressures of its increasing population by expanding its borders. Enterprising developers purchased plantations surrounding the city that soon became neighborhoods filled with large houses and spacious grounds. As the largely residential French Quarter filled with growing families, wealthy Creoles like the Musson Family began to occupy this newly available housing, and the Esplanade Ridge Neighborhood was born.

The Degas Tour is designed to portray the life of the Artist during the Reconstruction Era after the Civil War in his family home in New Orleans. Degas resided in this House (1872 - 1873) with his maternal relatives, the Musson Family, whose business was cotton. While he resided in the House, Degas created at least twenty-two works of art including the detailed scene of Michel Musson's office. The tour highlights two of the Artist's most famous works.

Guided tours by appointment only.