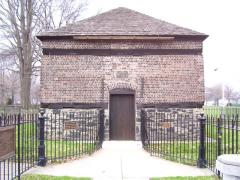 One of the most important sites of the French and Indian War, this museum tells the story of the fight for control of North America.

Located in Point State Park, at the convergence of three great rivers, the museum is the site of the ruins of the British-held Fort Pitt, constructed in 1759, formerly the French Fort Duquesne. The two great powers vied for control of the Point, which was the key to the Ohio River Valley. The fort was also important in the American Revolution as well as the development of the city of Pittsburgh, topics which the museum explores in great detail. The museum holds both permanent and temporary exhibits, one currently celebration Pittsburgh's 250th year. The history of the area is explored through maps, artifacts, videos, and images.