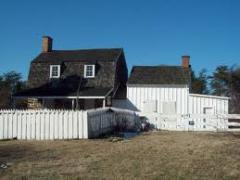 Built by Stephen Hancock in 1785, this restored farmhouse depicts over 200 years of American farm life.

Hancock’s Resolution is a small farmhouse that is considered a national treasure for how it authentically depicts the remote American countryside as it existed for hundreds of years.  Since its construction in 1785, it has witnessed centuries of American history, beginning with John Smith’s exploration of the Chesapeake.  The museum house also depicts the lives of American Indians, life on the Chesapeake during the War of 1812, and pre-Civil War commerce.  The historic home hosts several living history events throughout the year, such as War of 1812 reenactments.