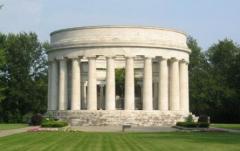 The monument, set in ten acres of landscaped grounds, is similar in appearance to a round Greek temple. The simple Doric features and spacious surroundings combine to create one of the most beautiful presidential memorials outside Washington, D. C.

Begun in 1926 and finished in the early winter of 1927, the structure is built of white marble. Designed by Henry Hornbostel, Eric Wood and Edward Mellon, the structure is 103' in diameter and 53' in height. The open design honors the Hardings’ wishes that they be buried outside.

The memorial is also important in American History because it is the last of the elaborate presidential tombs.