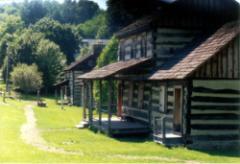 Hanna's Town, founded in 1773 and named for its founder Robert Hanna, acted as the first Seat of Westmoreland County and the first English court west of the Allegheny Mountains. The town was an oasis for travelers, settlers and those seeking justice and order in the often chaotic environment of the western Pennsylvania colonial frontier.

The town and its inhabitants played a major role in the armed conflict between Pennsylvania and Virginia for control of the area now recognized as southwestern Pennsylvania.

Hanna’s Town was active in various issues associated with the Revolutionary War. The Hanna's Town Resolves were written and signed here in May, 1775. This document is one of the most direct challenges to British authority preceding the Declaration of Independence. Before most other colonial communities took a stand, Westmoreland County residents proclaimed their willingness to take drastic measures to maintain and defend their rights against British oppression. Hanna's Town was an important center for the recruitment of militia for the western campaigns against the British in Detroit and their Native Americans allies. In one of the final battles of the war, Hanna’s Town was attacked and burned on July 13, 1782 by a raiding party of Indians and their British allies. The town never recovered, and the county seat was moved to Greensburg in 1786.

The town site’s subsequent conversion to farmland in the early 1800’s preserved it as an archaeological time capsule of 1770 frontier life during the waning British colonial period and the emerging American republic, and it remains an almost unique archaeological resource in this area.