House In The Horseshoe 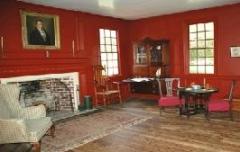 During the American Revolution, groups of citizen-soldiers called Whigs or revolutionists, and Tories, who were still loyal to the king of England, waged irregular warfare against each other in North Carolina's backcountry (western frontier). The House in the Horseshoe was then the home of Whig colonel Philip Alston. On the morning of July 29, 1781, while Alston and his band of revolutionaries were camped at the home, they were attacked by a larger unit of Tories, whose leader was the notorious David Fanning. During the ensuing skirmish, the Fanning's forces attempted to light the house on fire by rolling against it a cart filled with burning straw. After several casualties on both sides, Alston surrendered. The house was left riddled with bullet holes, many of which can still be seen today.