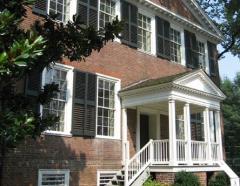 This temple-front, four-room plan house with an Adamesque interior has undergone remarkably few changes since Marshall's ownership. It reflects much of its original appearance, combining Federal characteristics such as Flemish-bond brickwork, a Roman temple pediment, and Neo-classical motifs along with Georgian elements such as rubbed brick lintels, an English-bond brick water table, and paneled interior walls and wainscoting.

Marshall owned a square in the fashionable residential area known as Court End. Many of his friends and relatives bought four lots that comprised a square or city block. These properties, which included their homes, support buildings and gardens, were known as "plantations-in-town." Marshall's square included the residence, his law office, a laundry, kitchen, carriage house and stable, garden and carriage turn-around.

Archaeological and architectural analysis of the structure indicates that the porches on three sides of the house were not part of the original construction. Declarations of insurance issued by the Mutual Assurance Society reveal that Marshall made several modifications to the house prior to 1815 The property remained in the Marshall family until 1911 when it was sold to the City of Richmond. The City built John Marshall High School, used until the 1960s, directly behind the house.

Today, the John Marshall Courthouse fills half of the square. The John Marshall House is managed by APVA-Preservation Virginia and has been open to the public since 1913. The home retains most of its original features, plus a rich collection of family-owned furnishings and other Marshall memorabilia.