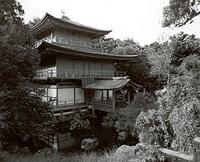 The State of Hawaii established the Honolulu Memorial Park as a community service cemetery in 1958. The Honolulu Pagoda is architecturally significant for three reasons: it was designed with the original proportions of the Nara Pagoda and uses the bracketing construction techniques found in the traditional design; it is the largest pagoda ever built; and it incorporates new construction techniques using concrete and steel.

The Mirror Lake Garden is also designed in the style of the Muromachi Period (1335-1573). The design of this garden is based upon the symbols of the Buddha's world. Within the garden is the Kinkauji, which has upon its pinnacle, the statue of the phoenix, the symbol of the Paradise of the heavenly Buddhas. Originally, carp fish were donated to Mirror Lake---traditionally the significance of the carp fish is a Japanese historical and religious one: carp fish are always found in the ponds of the temples for, through the carp, one's sins were washed clean. The development of this property shows the respect and acceptance that the Japanese community underwent after World War II when the Japanese-American population was proving to be a vital economic force in Hawaii's society. The return of the heroes from the 442nd Regiment after World War II gave pride to the Japanese-American community.