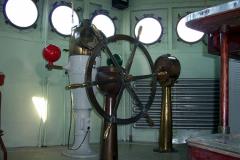 The Lightship "Overfalls" was the last lightship built by the United States Lighthouse Service. It was commissioned as the LV (light vessel) 118 in 1938 and was considered at that time to be "state of the art" in lightship design.

The Overfalls had a distinguished career before the Coast Guard donated it to the Lewes Historical Society in 1973, when it was moved to the canal in downtown Lewes, DE. Between 1938 and 1972 it was stationed at three different lightship stations: first, at Cornfield Point off the coast of Connecticut, then at the Cross Rip Station off the coast of Massachusetts, and finally the Boston Station just off Cape Cod. After suffering major structural damage in a December, 1970 storm, the Overfalls was taken out of service in 1971, and decommissioned in 1972.