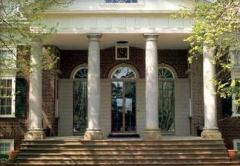 Construction began in 1769 according to Jefferson's first design, which was completed (except for porticoes and decorative interior woodwork) when he left for Europe in 1784. Work on a new design for remodeling and enlarging the house began in 1796 and was complete by 1809. Jefferson continued to build and augment his home for most of his life, leading his biographer Jack Mc Laughlin to write, "he left for us a detailed portrait of himself in timber, brick, plaster, and paint."