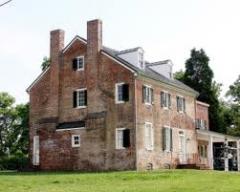 Archaeological evidence shows that American Indians were present from the Archaic Period (7500-1000 BC) through the Woodland Period (1000 BC-1600 AD). Early Archaic hunters and gathers visited the Upper Patuxent River to harvest the river's natural resources. Later, Woodland Indians farmed the land and lived in permanent villages along the river until the 1600's when European Settler arrived.

The English colonial town at Mount Calvert was established by the 1684 Act for the Advancement of trade. It became the county seat when Prince George's County was organized in 1696 and was renamed Charles Town. By 1710, an Anglican Church, courthouse and jail had been built. At the riverfront wharves, ships brought goods from Europe in exchange for tobacco. Ordinaries (taverns) provided food, drink, and lodging to planters and merchants. In 1721, the county seat was moved to Upper Marlboro. Charles Town gradually disappeared and Mount Calvert became a ferry landing.

During the War of 1812, the British jealously eyed Washington, DC. Their planned land assault on the capital involved uniting ground troops with marines from ocean vessels. In August 1814, their soldiers marched north from Benedict, Md., raiding private homes and confiscating flour, firearms and tobacco along the way. British ships in the Patuxent River shadowed them as they traveled north, and at Mount Calvert approximately 500 marines poured off boats to reinforce the soldiers already on land. From there, they moved south through Bladensburg, Md., sacked Washington, and returned to Mount Calvert to board their ships within the span of about a week. Today, the Archaeological and Historical Park offers a spellbinding view of the historic Patuxent and the site at which the British united their land and sea forces for the first time.

Between the 1780s and 1860s, Mount Calvert was a tobacco plantation. The brick plantation house (built in the 1780s) housed the families of plantation owners John Brown, John Brooks and Samuel Berry. The Mount Calvert plantation depended on slave labor. By the mid-1800s, fifty-one enslaved African-Americans lived and worked on-site.

Today, an interpretive trail and a museum exhibit tell the story of Mount Calvert's past. Signs along the trail highlight American Indian cultures, colonial Charles Town, the 19th century, African-American history, the War of 1812, and the Chesapeake Beach Railway.

The park features ongoing archaeological and historical research and provides programs and hands-on activities for the public. Hiking is also permitted. Relic or artifact collecting is strictly prohibited.