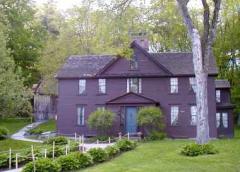 Orchard House was the Alcott family's most permanent home (from 1858 to 1877). Louisa May Alcott wrote her classic work, Little Women, here in 1868 at a "shelf" desk built by her father especially for her. She also set Little Women in this home, causing guests to comment that "a visit to Orchard House is like walking through the book!" There have been no major structural changes to the site since the Alcotts’ time of residence. Approximately 75% of the furnishings were owned by the Alcotts, and the rooms look very much as they did when the family lived there.